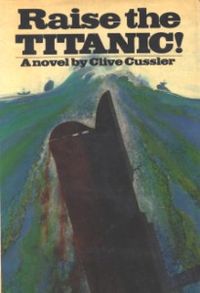 Clive Cussler wrote a cold war thriller I read called Raise the Titanic. In his story, a unique element call "byzantium" is thought to be locked in a safe on board. The mineral is needed for a new weapon and sets off a clandestine race to get at it. The ship is refloated (nobody believed Jack Thayer's story that she had broken in two). There is also a Geraldo moment when the safe is opened which James Cameron must have copied decades later in his 1997 opus Titanic. I already noted how the story of fictional Rose Dawson was inspired by the real life Sheila Mitchell
Posted by chickelit at 8:04 AM