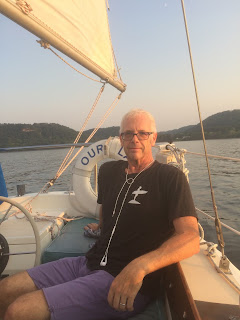 My wife and I are separating after 33 years. Harsh but true. We had a good run. I blame the current political climate, but the official reason is "irreconcilable differences."

I have decided to "retire" to Wisconsin to write a book about my late father: a deeper dive into my "Revisiting Highway 61" series already blogged here (see the link). My brother and I are the only witnesses left to my father's incredible and early interest in scuba diving and his pioneering underwater photography. I don't expect to make any money off of this -- it's just a strong desire of mine -- it's something I feel I must do and do well. I'm giving myself 6 months. I'm also going to start an online business selling what I make. California is terrible place to start a business in case you haven't heard.

That photo was taken recently aboard a rented sailboat on Lake Pepin which is a natural feature of the Mississippi River. After the outing I saw another boat in the marina: 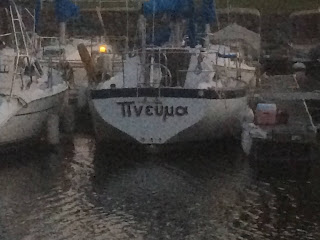 It was getting dark and the photo is a bit grainy but the other boat's name was πνεύμα. I instantly recognized the word "pneuma," but I guessed wrongly that it meant "wind." It actually means "spirit" which is an inspired name for a sailboat. Inspired in the classical sense.