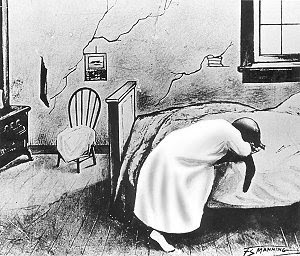 Please enjoy the day whether with family or friends; be extra generous with your hearts, and don't forget to give something of yourselves this Holiday Season to kids in need.
Posted by chickelit at 11:33 PM No comments:

In January of 1999, I unexpectedly received a packet of letters from an aunt. A brief note inside explained that they had been written by my late father to his family while he was stationed overseas. My grandmother had kept the letters which ultimately survived both his death in 1995 and her own in 1997.  My aunt (my grandmother's executor) wrote me that she thought the letters would interest me, as I had lived in Germany for a while in the early 90’s.

The Army drafted my father in 1951 at age 19, under the Universal Military Training and Service Act, in which all men 19-26 were subject to 24 months service in the US Army. After induction at Ft. Sheridan, Il, and basic training at Ft. Knox KY, and even more specialized training at Fort Campbell KY,  he was sent overseas and stationed in Germany until the end of 1953, serving with the 141st Tank Battalion in the 3rd Armored Division of the US Army. His insignia: 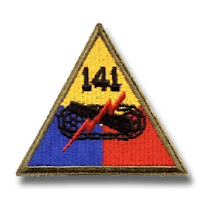 The Army was involved in the Korean war at the time, and President Truman believed that the war might be a ploy to concentrate all American resources on the Korean peninsula, thus leaving western Europe open to invasion by the Soviet Bloc. The Berlin Airlift had already occurred in 1948, along with the Soviet occupation of Czechoslovakia in 1948. NATO was created in 1949 because of the perceived Soviet threat towards Western Europe. After the start of the Korean war, the United States deployed 4 divisions to Europe, culminating in the creation of the USAREUR in 1952. By this time, the US role in Germany had officially changed from an occupying force into an allied defender of the newly-formed German Federal Republic (West Germany). The 141st’s major task was to ferry US tanks to the Czech border to offset the Russian maneuvers occurring there. According to other soldiers in the battalion, the tanks were always fully armed and loaded, ready for war.
When my father's unit arrived in Germany in August of 1952, the barracks had not yet been built. Because of the rapid deployment of all these units and their associated personnel, there was a serious lack of adequate facilities at Fliegerhorst and they were initially posted to an old Luftwaffe barracks at Nellingen for a month [see the map below for locations].

The cities in red are places he was stationed or visited while in the service in Germany 1952-53: 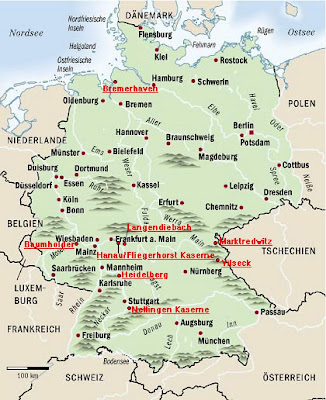 And here is how Germany was carved up at the time: 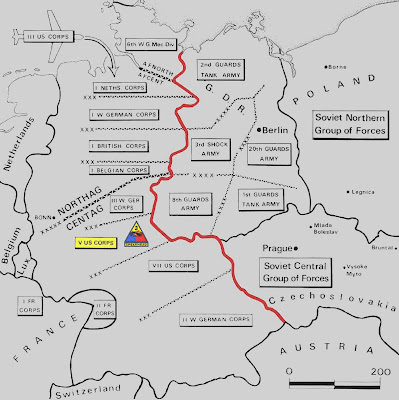 I'm thinking about posting letters from his entire time. They trace the mind of a young man serving his country, albeit as a draftee of the times.  He saw no direct combat heroism,  though his older brother, then serving in Korea, did. There are many names of living people here to protect, and I'm going to edit these letters a bit. Here is what he wrote after arriving at Fort Sheridan for basic training:

I left Mil. At 4:00 o'clock Tue. afternoon for Fort Sheridan Ill. It took 2 hrs. They gave us about $200.00 worth of clothes today. Army life hasn't been to rough but they tell us it will be later. We are going to stay here about 7 days. There was 41 of us when we left Mil. Most of the guys we are with are 21 and over. We have been having good eats. Feel like I am already gaining weight. We are going to have tests all day tomorrow, shots Friday and maybe shipped out Mon.

P.S. a G.I. party Fri night Scrub the Barracks. The weather down here has been cool but no snow yet. When my check comes for the last 3 days work at C. take it and the 20 in my green box and put it in the bank. We should be getting $20.00 advanced pay this week yet. Seems like I've been gone a month. I hope everything is O.K.

The Rediscovery of San Francisco Bay

Mystery shrouds the discovery of the San Francisco Bay like a thick fog. The Bay lay "undiscovered" for over two hundred years, despite Spanish, Portuguese, and English ships plying the coast, one after another. The Bay was finally "discovered" 240 years ago this week by the Portola Expedition of 1769.  In the words of the Editor of the book The Discovery of San Francisco Bay: The Portola Expedition of 1769-1770:


From Cabrillo's voyage along the California coast in 1542 to the Portola Expedition's discovery of San Francisco Bay in 1769 is such a terribly long time that one might well think the Spanish lacking in skill, curiousity, something. Why didn't they find what is now to us an obvious entry to this wonderful inland sea? There are several answers. One is that during a considerable part of the year the Golden Gate is hidden by fog. Another is that, in the days of small sailing ships, dependent entirely upon the winds for propulsion, sea captains had a need and duty to stay well away from the coast, lest an adverse wind blow them onto rocks and shallows and wreck their ships. A third reason is the peculiarities of geography--of the lay of the land. From outside the Golden Gate the entrance is practically invisible.  From most angles, either Angel island or Alcatraz island is in direct line of view [from the sea], and thus make the opening appear to be a solid coast line. Even when the islands do not conspire to obscure the view into the bay, the crest of the Berkeley hills lines up so well with the sides of the Golden Gate as to create the impression of nothing but land.

I'd like to offer a fourth possibility: the Bay was known but remained a well-guarded trade wind secret. The evidence? --explorer Miguel Costanso's own words--see below.

The Portola expedition had marched northwards from San Diego in July of 1769, mainly hugging the coastline (they were searching for the fabled Monterey Bay and didn't want to miss it).  When they got to the San Francisco peninsula (after about three and a half months), they marched up along the seacoast, at first missing the southern arm of the Bay to the east because of the separating mountains and hills.  On Tuesday, October 31, they halted near present day Portola National Monument, south of present-day Pacifica, somewhere near the first little notch jutting out of the seaward side of the lower San Francisco peninsula (see map below): 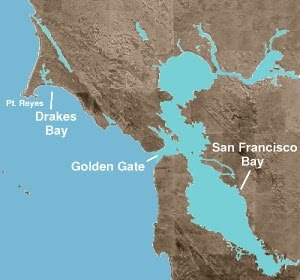 From atop San Pedro Mountain, the explorers saw to the northwest a bay formed within a point of land (present-day Point Reyes) that opened towards them (Drake's Bay). Farther out to the west, they saw several islands (the Farallon Islands). To the east of Drake's Bay, and much closer they saw what appeared to be the mouth of a channel (the Golden Gate).
The explorers were carrying with them the sailing directions of Cabrera Bueno, a Phillipino and veteran trans-Pacific sea voyager; it seemed to them that they had arrived at what Bueno called the Bahia de San Francisco:


Thursday, 2 November [1769]: Several of the soldiers requested permission to go hunting, as many deer had been seen. Some of them went quite a long way from the camp and reached the top of the hills so that they did not return until after nightfall. They said that to the north of the bay they had seen an immense arm of the sea or estuary, which extended inland as far as they could see, to the southeast; that they had seen some beautiful plains studded with trees; and that from the columns of smoke they had noticed all over the level country, there was no doubt that the land must be well populated with natives. This ought to confirm us more and more in the opinion that we were at the port of San Francisco, and that this was the estuary of which the pilot Cabrera Bueno spoke; we had seen its entrance between some ravines while descending the slope of the bay. In regard to this, in his sailing-directions, Cabrera Bueno uses the following words: 'Through the middle ravine, an estuary of salt water enters without any breakers; coming in, you will find friendly Indians, and you will easily obtain fresh water and fire-wood.'

We also conjectured from these reports that the scouts could not have passed to the opposite side of the bay, as it was no mere three days' undertaking to make the detour rounding an estuary, the extent of which was greatly enlarged upon to us by the hunters.