Once more, if Nature had given a scope for things
To be forever broken more and more,
By now the bodies of matter would have been
So far reduced by breakings in old days
That from them nothing could, at season fixed,
Be born, and arrive its prime and of life.
For, lo, each thing is quicker marred than made;
And so what'er the long infinitude
Of days and all fore-passed time would now
By this have broken and ruined and dissolved,
That same could ne'er in all remaining time
Be builded up for plenishing the world.
But mark: infallibly a fixed bound
Remaineth stablished 'gainst their breaking down;
Since we behold each thing soever renewed,
And unto all, their seasons, after their kind,
Wherein they arrive the flower of their age.

Because I like this version better than Henley's
Posted by chickelit at 2:28 PM 2 comments:

It's Only Rock and Roll But I Like It

Driving up the 5 freeway the other day, tapping out the drum part on the steering wheel on "It's only Rock and Roll (But I Like It)," I noticed the most remarkable thing about the song:  The Ben Hur drum track!  Watch this clip again:


Now check out this brief clip of the Stones' song I made;  I counted out the syncopated snare beats to draw attention to them: Link

I had always assumed that Charlie Watts played drums on that track--wrong!  It was Kenny Jones of The Faces, along with ex-bandmates Ronnie Wood and David Bowie!  The incredible story is here. Here's what Charlie Watts says:


I didn't play drums on that, Kenny Jones did. I was in bed, sleeping at the time. They called Kenny Jones because he lived nearer to Richmond, it was done in a very beautiful house there that Ronnie used to own. Pete Townshend owns it now:

Keith Richards wrote about the making of the song in his autobiography, Life.


That's where I first heard "It's Only Rock 'n' Roll," in Ronnie's studio. It's Mick's song and he'd cut it with Bowie as a dub. Mick had gotten this idea and they started to rock on it. It was damn good. Shit, Mick, what are you doing it with Bowie for?  Come on, we've got to steal that motherfucker back. And we did, without too much difficulty.  Just the title by itself was so beautifully simple, even if it hadn't been a great song in its own right.  I mean, come on. "It's only rock and roll but I like it."

You can hear traces of the original track embedded in the song. Listen here to the "quiet" part near the end--all the original players emerge: link

What about the Rolling Stones' big 50th anniversary tour? There are rumors that Keith Richards is fighting an unnamed illness.  Here's what the man says:


'Basically, we’re just not ready,' says Richards. 'The Stones always really considered ’63 to be 50 years, because Charlie [Watts] didn’t actually join until January. We look upon 2012 as sort of the year of conception, but the birth is next year.' link

All According To A Nefarious Plan

This struck me as odd too last night:


So Obama thinks high gas prices are due to a vigorous, recovering economy that’s supposedly no longer on the “verge of collapse”?   There are so many fundamental errors in basic economics that it almost leaves one speechless. link

Of course, it's all according to plan: another link

My wife suggested that oil companies might be colluding to raise prices in California in order to help Romney.  I reassured her that Dianne Feinstein was already on the case.
Posted by chickelit at 3:24 PM 6 comments:


The [Chinese] currency manipulation has been going on for at least 10 years. I happen to think it was bad policy, but I understand why it happened.  I did not personally gain from it to the extent that others have, for example by occupying an over-leveraged property or working for a company which does. I don't want to see military action with China but I wouldn't doubt that it will come to that.

Years ago, when I worked for a Bay area start-up with the late Henry Taube ("The Conversions with Henry" guy I blog about), we hired a young Chinese guy who worked for us for about a year.  He was a hard worker but contributed no patents or publications (intellectual property), and left, returning to China.  He ended up (according to my former boss) appropriating a decent chunk of alkane activation technology back to China.
Zhu-lin (I recall his name) spent what little time he socialized talking about how the map of the real China resembled a giant chicken, with Korea being the Korean peninsula as the wattle and Vietnam being the feet and legs.  You can see this rightward facing chicken if you look at a map and use a little imagination. He said (ca. 1998) that it was only a matter of time before the chicken was whole again.

China has ancient enemies in Asia which I'm sure you know.  They have historically been weaker and may not wish to remain so always, though that may be inevitable.

Regarding That Biden Smile...

I called it back here: link
Posted by chickelit at 9:31 PM 9 comments:

According to Real Clear Politics, the Electoral College map is starting to like this:

Deep blue states on both coasts (right and left parens) with only Illinois solidly for Obama.

Sixty Grit asks, Did you drop an "L"?

Glenn Reynolds pulled a different quote from this story on electric cars: link

I liked this one because it reminded me of how fuel taxes act like brakes:


If you’ve ever ridden in a Prius, you may have noticed that it creeps forward when you take your foot off the brake.

Also, Bremsstrahlung is such a cool word/concept that I wanted to put it out there.
Posted by chickelit at 3:53 PM 2 comments:

Rhodium and I had a thing going on once... 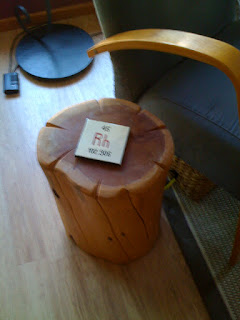 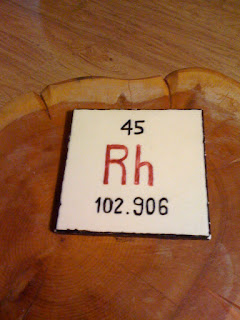 It's a coaster I made from a ceramic tile blank--painted, glazed, and kiln-fired.
Posted by chickelit at 10:46 AM 11 comments:

The heir of the deceased owner of the warehouse has offered the building for sale to the City of Richland Center at a modest price. The community is in the process of organizing an effort to purchase and restore the building. It is structurally sound but will need restoration work to the decorative concrete friezes, tuck pointing of the brickwork and, yes, a new roofing system. Anyone interested in the effort can follow the project on FaceBook: https://www.facebook.com/ADGermanWarehouse or contact the Richland Chamber and Development Alliance in Richland Center: chamber@richlandalliance.com, (608) 647-6205

I've been thinking about the 14 minute song called "Tempest" on Bob Dylan's eponymous new album. I had some thoughts, but then went fact checking and ran across this site which has a head start.  I especially liked the insight into the old Carter Family song which I linked after the lyrics below:


The pale moon rose in its glory
Out on the Western town
She told a sad, sad story
Of the great ship that went down

The watchman, he lay dreaming
As the ballroom dancers twirled
He dreamed the Titanic was sinking
Into the underworld

Passengers were flying
Backward, forward, far and fast
They mumbled, fumbled, and tumbled
Each one more weary than the last

The veil was torn asunder
'Tween the hours of twelve and one
No change, no sudden wonder
Could undo what had been done

Glass of shattered crystal
Lay scattered roundabout
He strapped on both his pistols
How long could he hold out?

The rich man, Mister Astor
Kissed his darling wife
He had no way of knowing
It'd be the last trip of his life

Calvin, Blake and Wilson
Gambled in the dark
Not one of them would ever live to
Tell the tale on the disembark

They lowered down the lifeboats
From the sinking wreck
There were traitors, there were turncoats
Broken backs and broken necks

The bishop left his cabin
To help others in need
Turned his eyes up to the heavens
Said, "The poor are yours to feed"

There were many, many others
Nameless here forever more
They never sailed the ocean
Or left their homes before

The watchman, he lay dreaming
The damage had been done
He dreamed the Titanic was sinking
And he tried to tell someone

The captain, barely breathing
Kneeling at the wheel
Above him and beneath him
Fifty thousand tons of steel

When the Reaper's task had ended
Sixteen hundred had gone to rest
The good, the bad, the rich, the poor
The loveliest and the best

The watchman he lay dreaming
Of all the things that can be
He dreamed the Titanic was sinking
Into the deep blue.