...Even for me this letter is difficult, how much more difficult it will be for you! Unfortunately there won't be any good news in this letter. And it hasn't been improved by my waiting ten days either. The situation has now become so bad we fear we'll soon be completely cut off from the outside. Just now we were assured that this mail will definitely get out. If I knew that there would be another opportunity, I would wait still longer. But that is just what I don't know; so, for better or for worse, I have to come out with it. For me the war is over.

I am in a field hospital in Gumrak, waiting to be transported home by plane. Although I am waiting with great longing, the date is always changed. That I will be coming home is a great joy for me and for you, my dear. But the condition in which I'll get home won't be any joy for you. I am in complete despair when I think of lying before you as a cripple.

But you must know something - that my legs were shot off.

I'll be quite honest in writing about it. The right leg is totally shattered and amputated below the knee. The left one is amputated in the thigh. The doctor thinks that with prothesis I should be able to get around like a healthy man. The doctor is a good man and means well. I hope he is right. Now you know before you see me. Dear Elise, if I only knew what you are thinking. I have time all day long to think of nothing but that. Often my thoughts are with you. Sometimes I have also wished that I were dead, but that is a serious sin and one must never say such a thing.

Over eighty men are lying in this tent; but outside there are countless men. Through the tent you can hear their screaming and moaning, and no one can help them. Next to me lies a sergeant from Bromberg, shot through the groin. The doctor told him he would be returned home soon. But to the medic he said "He won't last until evening. Let him lie there then." The doctor is such a good man. On the other side, right next to me against the wall, lies a soldier from Breslau who has lost an arm and his nose, and he told me he wouldn't need any more handkerchiefs. When I asked him what he would do if he had to cry, he answered me, "No one here, you and me included, will have a chance to cry any more. Soon others will be crying over us."

I restarted this blog series. The key to understanding the series is here, and here. Each letter (39 in all) was written by a different and anonymous German soldier who knew he was going to die. I associate these letters with Christmastime for reasons explained at the links.
Posted by chickelit at 8:44 PM 13 comments:

100 Years Ago On The Western Front

[Added]: An edited dramatization from the BBC:

The scheme belongs to a recent chemistry paper entitled "Nonmetal Catalyzed Hydrogenation Of Carbonyl Compounds" which I think shows significant advancement in chemistry. For the non-chemist, I'll unpack the title.

You may not be interested in hydrogenation, but hydrogenation is interested in you: it feeds you. The metal-catalyzed hydrogenation of vegetable oils is big business. You may have gotten away from trans-fats, but are you free of cis-fats?  How about saturated fats? The food industry uses hydrogen and metals like nickel to hydrogenate food stuffs. And then there is the "hydrogenation" of nitrogen to make fertilizer.

What these guys in London did is remarkable because they used hydrogen (H2) to make alcohols (top right) from ketones (top left). And they used only C, H, O, B, and F atoms, spatially arranged as shown. No metals.

Nature has little use for H2, the simplest of molecules. Relatively little free H2 exists on earth. There is a class of enzymes called hydrogenases, but guess what? They use metals to activate H2. So this work goes above and beyond Nature itself.
Posted by chickelit at 11:27 AM No comments:

"The Speck Of Matter God Had Not Welcomed At Creation..." 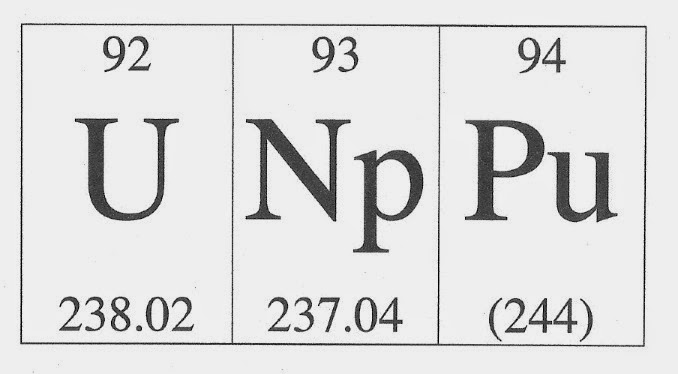 Today marks an anniversary of the Nagasaki atomic bomb, the so-called "Fat Man." Many forget that we dropped two kinds of atomic bombs in three days in 1945: The first, "Little Boy," contained all the laboriously accumulated U-235; its design was so simple that it didn't need testing: Fire one subcritical U-235 mass at another U-235 subcritical mass and blammo! --  the whole thing went nuclear.

The second was a plutonium bomb -- and its design was so radical that it had to be tested first, hence "Trinity" at Yucca Flats.

The bomb makers knew early on that U-235 would be the limiting factor: Only 1/140th of any natural uranium source was useable for a bomb -- the rest is the unusable U-238 isotope. But the eggheads (really a who's who of nuclear physicists and chemists) figured out that nuking the otherwise useless U-238 with cyclotron radiation would transmute that useless uranium isotope into heavier elements. Thus began a series of top secret experiments at Berkeley which extended the Periodic Table one element at a time.  That sort of work still continues.

First came element 93, the very first transuranic element, now known as neptunium, and synthesized by Edwin McMillan and Philip H. Abelson in 1940. That element proved unusable as a fissile material, so the search for the next heavier element continued. The work quickly became a rather a dirty job -- separating the toxic gemischt into identifiable components --and one more suited for chemists. Glenn T. Seaborg, and a graduate student, Arthur C. Wahl, did the yeoman's work. By early 1941, they knew that they had something new, but were unable to separate it from co-produced thorium.  Seaborg and Wahl pressed on, working in a cramped third floor laboratory in the chemistry department at Berkeley. Success followed and by early March 1941 Seaborg recorded:


With this final separation from thorium, it has been demonstrated that our alpha [particle] activity can be separated from all known elements and thus it is now clear that our alpha activity is due to the new element with atomic number 94.

Within weeks, and after gathering enough material, tests showed that element 94 was fissile bomb material. They were already way ahead of anyone else. Because it was immediately apparent that chemical separation of elements was easier than isotopic separation, plutonium production became a second major project in the Manhattan Project, running in parallel to uranium isotope separation.

Richard Rhodes wrote in his incomparable "The Making Of The Atomic Bomb:"


Not until 1942 would they officially propose a name for the new element that fissioned like U-235 but could be chemically separated from uranium. But Seaborg already knew what he would call it. Consistent with Martin Klaproth's inspiration in 1789 to link his discovery of a new element [uranium] with the recent discovery of the planet Uranus and with McMillan's suggestion to extend the scheme to Neptune, Seaborg would name element 94 for Pluto, the ninth planet outward from the sun, discovered in 1930 and named for the Greek god of the underworld, a god of the earth's fertility but also the god of the dead: Plutonium.

In Memory of the Union

The Memorial Union on the UW-Madison lakeshore opened in the fall of 1928, dedicated to the men and women of the University who had served in wars.

Inside the Student Union, der Rathskeller and der Stiftskeller feature murals done in a German beer hall style. My favorite is the one called "The War Between Wine And Beer"

It's hard to appreciate the detail in that photo. More detailed photos are here. That mural is not that old (1978) and is an inspired copy of the original at Munich's Rathskeller. The fight is not just an imaginary one between beer and wine but also a metaphor for the age-old fight between the wine-loving French and the beer-loving Germans. A history of the murals is here
Posted by chickelit at 1:19 PM 2 comments:


The key to Led Zeppelin is that somebody is always playing a counter point. You can hear that. ~Jimmy Page

I know that Page was talking musically, but the phrase popped into my head as I began write a tribute to Charlie Watts who will celebrate his 50th wedding anniversary in October.


Through all those years of temptation, one guy stays true and faithful. That's sort of a "counter point" isn't it?

I always thought Charlie Watts' rock drumming was deceptively simple. It wasn't hard to copy. His jazz drumming is another story. You can tell he's an old school drummer by the way he holds his sticks: traditional grip.

Posted by chickelit at 6:23 PM No comments:

I'm trying an experiment: I have an improved product and want to market it via the Internet.  Don't laugh until you hear me out.

My "product" is something I formulated for making fake spills. I developed a recipe for faking most any clear or colored liquid and semi-solid. The materials are a polymeric plastic and a secret coloring method.