Back here somewhere I commented that new chemical terms were relatively rare -- infrequent enough to keep up with them. Well here's a new one: "agostomer."  Classics scholars and word lovers should like the origin of this new word.

The word agostic was coined about 30 years or so ago to describe how certain two-point bonding occurs. The Greek word agostos (ἀγοστός) means the "flat of the hand" and is apparently very rare and only occurs once in Homer's Iliad (it took me some doing to find that Greek link). The metaphor is that the bonding resembles a man's bent arm with the flat of one hand on a hip such that there are two points of arm attachment to the body: a strong one at the shoulder and a weaker one between the hand and the hip.

Recently, an old friend of mine co-discovered and reported on a remarkable new compound which crystallized in two subtly different ways, one analogous to having the palm on the hip and the other with the back of the hand on the hip. The two isomers are termed "agostomers" and also show the  interesting property that one agostomer crystal is orange and the other one is blue. Here's a depiction: 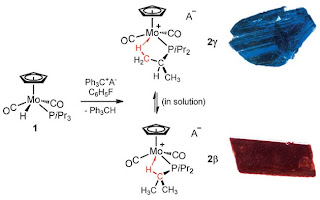 What Should Be Forgiven?

Palladian's version of the Lord's Prayer (evolved from a machine) struck me because of how the words "trespasses" and "trespassed" survived wholly intact:


Or father
court in heaven
shall be dining biking them,
but I will be done
on corporate as it is in heaven
give us this day ordeal the bride
and for guests are trespasses
as a brief for give those who trespassed against its
and leave us not into temptation
to deliver us from evil
for design to step forward
and glory forever,
on and.

The Lord's Prayer has appeared in English since the latter's earliest recorded times but the word "trespass" did not appear until the 16th century. Originally, we used the word gyltas which is cognate with the modern English word "guilt":

By the 14th century, the word had evolved to a combination of dettis and synnys, which are cognate with modern English words "debts" and "sins;" Middle English had clearly felt the influence of the Norman Conquest (1066):

By the 16th century, "trespasses" had supplanted guilt, sin, and debt to give the verses we know by heart:

Our Father which art in heaven, hallowed be thy name.
Thy kingdom come.
Thy will be done in earth as it is in heaven.
Give us this day our daily bread.
And forgive us our trespasses, as we forgive them that trespass against us.
And lead us not into temptation. But deliver us from evil.
Amen.
___________________
"Trespass" has an archaic meaning of sin or transgression but the word today largely means to stray into another's territory--like being "offsides" -- 5 yard penalty. The OED instructs on the origin of trespass; it is French in origin, meaning to transgress or literally to go beyond. It's odd that we use a word of French origin when the French themselves use the word debit or debt and apparently always have done so: link

The Italians use debito and the Latin Mass uses the identical concept: link

I once wrote a blog post on this topic (which originated in an Althouse comment). There is a curious convolution of monetary debt and sin in the German language (Nietzsche is involved) and I wrote about it here.

[Cross-posted with a question here]

I was often asked to explain chemical nomenclature in the context of such and such intellectual property law matter and one day I surprised a trial lawyer — an elderly gent — with my knowledge. He was actually annoyed at first, perhaps because he felt hostage to knowledge which he did not possess. Actually, he probably just resented that I could bill time for knowledge which I already possessed — just like he could. Had he known what it had cost me to acquire my art, he would also have known that it would break any law firm to buy it. Meanwhile, I had been hard at work learning legal terminology for several weeks, and although I had made good progress, it had been accomplished under great difficulty and annoyance. But he was greatly impressed and after I had explained a while, he said my explanation of the chemical language was very rare, possibly "unique" and he wanted to add me to his litigation team.

Organic chemistry just now is enough to drive one mad. It gives me the impression of a primeval forest full of the most remarkable things, a monstrous and boundless thicket, with no way of escape, into which one may well dread to enter.

A person who has not studied chemistry — especially organic chemistry — can form no idea of what a perplexing language describes that thicket. Or perhaps they can, but can come up with no logical explanation for why things are so. I aim here to simplify.

The Germans invented modern organic chemistry and they logically fashioned the nomenclature in their own image — and just as the German language is troublesome for the beginner — having so many parts of speech — it's no wonder organic nomenclature is so troublesome.

An average organic chemical name is a sublime and impressive curiosity; it may occupy several lines and comprise several unfamiliar names and numbers — things called moieties — and even Greek letters; it is built mainly of compound words synthesized by the writer around a core or parent name; it's quite often a word not to be found in any normal dictionary — several words compacted into one, but with joints and seams — that is, with hyphens; it may treat of up to umpteen different subunits, each enclosed in a parenthesis of its own, with here and there extra parentheses which reinclose three or four of the minor parentheses, making pens within pens: finally, all the parentheses and re-parentheses are massed together between a couple of king-parentheses, one of which is placed in the first line of the majestic structure and the other in the middle of the last line of it — after which comes the parent compound name, and you find out for the first time what the molecule is or at least what some chemical lexicographer thought it should be derived from. Sometimes, often as an afterthought — merely by way of differentiation — the writer shovels in the name of a salt, or in patent parlance "or salts thereof," signifying that the delicate molecular flower has been preserved as a salt, and the monument is finished. I suppose that this closing hurrah is often the doing of patent attorneys seeking to claim more broadly; it's not necessary, but covers the doctrine of equivalents.


To repeat, organic chemistry nomenclature was invented by 19th century Germans who wanted to create a simple system which closely mimicked the logic of their own language. Full stop. Therein lies the secret why that nomenclature is so seemingly obtuse — it is patterned after German syntax. In linguistics, syntax refers to the way in which morphemes are arranged. By analogy, "chemical morphemes" are irreducible units of metaphor — core words like "meth-," eth-," "prop-," and "but-" and ringed ones like "phen-" or "benz-" represent chemical entities. [1]  The studied reader may already recognize these morphemes in methane, ethane, propane, butane, phenyl, and benzene and the like. The endings "ane," "yl," and "ene" are, in a linguistic sense, inflections of the morphemes. Another word related to morphemes commonly used by chemists is moiety. Moiety refers to small clusters of recognizable function, for example, "acyl," carboxyl," "alkyl," etc.

By way of example, consider the common pain reliever ibuprofen which more properly goes by the name
RS-2-(4-(2-methylpropyl)phenyl)propanoic acid.

Chemical names are easier to read when you hold them next to the actual structure which is like a pictograph (hold that thought for later) or read them backwards in a mirror or stand on your head — so as to reverse the construction -- but because many refuse to learn the real language of chemistry — structural short hand — I'll muddle through the name of ibuprofen by way of example.  It's not a particularly elaborate molecule or name, but it strikes a nice balance between complexity and simplicity.

First comes "R,S." The "R" stands for rectus (Latin for right) and the "S" stands for sinister (Latin for left). This gives the enlightened reader notice that chirality is at hand — more on this later.

The second element in the name is the number 2, and because this number stands alone — outside of parentheses — the reader is asked to hold its meaning in abeyance until such a time as the parent morpheme is finally reached after much exhaustion of patience. Putting the "2" in front resembles the dreaded separable prefix verbs so common to German. Mark Twain wrote in his delightful essay, The Awful German Language:


The Germans have another kind of parenthesis, which they make by splitting a verb in two and putting half of it at the beginning of an exciting chapter and the other half at the end of it. Can any one conceive of anything more confusing than that? These things are called "separable verbs." The German grammar is blistered all over with separable verbs; and the wider the two portions of one of them are spread apart, the better the author of the crime is pleased with his performance.

The third element, (4-(2-methylpropyl)phenyl) is a microcosm of the whole name writ larger; in it we have a 2-methylpropyl corralled by parentheses, which is itself corralled by "4-" and "phenyl." The name is starting to look like a matryoshka doll.

At long last we arrive at the parent morpheme, which like the verb in a German sentence, tells us the key information: propanoic acid. In the lexicographer's mind, ibuprofen is a derivative of propanoic acid.

We have the germanic parenthesis disease in our language, too; also often expressed with em dashes and sometimes elipses and one may see cases of it every day in our books and blog posts: but with us it is — unless botched — the mark and sign of a practiced writer or a clear intellect, whereas with the Germans and chemical lexicographers it is doubtless the mark and sign of a practiced pen and of the presence of that sort of luminous intellectual fog which stands for clearness among these people. For surely it is not clearness — it necessarily can't be clearness.

Now dear reader, allow me to introduce a better way to depict all the foregoing and to illustrate the  foolishness:

I have color-coded the three main parts of the molecule, both in name and in the depiction. The reader immediately grasps that the red propanoic acid portion has a three carbon chain. The red number "2" in the name describes wherefrom the rest depends. The "R,S" refers to the two possible ways that the invisible hydrogen atom attached to carbon 2 may point: either out of or into to the screen or page. The portion circled in light blue is a phenyl moiety having six carbons numbered as shown. The curious reader can attest that the portion in green indeed appends from carbon 4 of the blue phenyl. The left-most portion — circled in green — is the "2-methylpropyl" portion: it's really a 3-carbon propyl chain having a methyl affixed to carbon 2.

Lastly, it is perhaps now apparent (to me at least) where the trivial name ibuprofen comes from: I parse ibuprofen into three separable pieces: ibu/pro/fen