Have You Heard Of The Ship Called The Good Reuben James?

I particularly like this old Woody Guthrie song sung by The Kingston Trio entitled The Sinking Of The Reuben James. The maker of this YouTube video put the names of each lost sailor into scrolling graphics.

I love how each man's name seems to rise from the blackened depths--names that might otherwise be forgotten:

Looking over some of the music posts I've put up in the past it's sad to see so many of the YouTube video links get disabled. Rumor has it that some of this creative YouTubing may all be coming to an end.

Surely there can be some kind of mutual recognition between the owners of the song's copyright and the artists wanting to make use of them. The short answer to this is licensing. But what artist is going to find (let alone contact) the owners of the copyright? I see an opportunity for Google here. Perhaps they could broker reasonable fee-for-usage licensing--something akin to iTunes.
Posted by chickelit at 4:32 PM 6 comments: 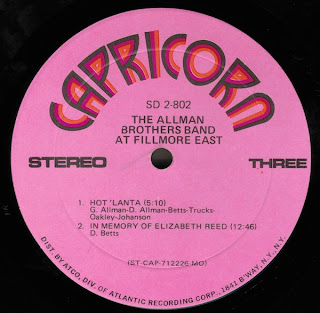 I love the live version of In Memory Of Elizabeth Reed on The Allman Brothers Band At Fillmore East which first appeared forty years ago next month. That's why reading this on Wikipedia sort of angered me [Tom Dowd was the Allman Brothers' producer]:


The clearest example of Tom Dowd's approach to the project comes in the 13 minute version of "In Memory of Elizabeth Reed" that is pieced together from multiple takes, one of them being the March 13th (first show) version that appeared on the original album. The band played the song three times during its Fillmore stand. 'One of them I hated,' Dowd says, 'but two of them were fantastic!' Dowd and mixer Jay Mark mixed down those two versions and proceeded to, as Dowd puts it, 'take this song apart. I came to the conclusion that in the first half of the song, up to Duane's solo, I had a better band performance and Dickey Betts' solo on the version that we had not used before. Starting with Duane's solo, though, it's the original version. Twenty-one year later, I know 'Liz Reed' as well as I know any song, certainly more than I did in that time of instant decisions. Putting the two versions together showed off the song best. Listen to it! Listen to the togetherness of Dickey, Duane, and Gregg on the theme lines, and how Butch and Jaimoe adjust to the changes up front. There's much more exciting interplay now, more like the band sounded those nights.'

Other sources confirm. Bruce Eder's Allmusic review of the 1992 volume says that 'It is also a slightly less honest release [than the original], where "In Memory of Elizabeth Reed" is concerned — Dowd edited the version here together from two different performances, first and second shows, the dividing line being where Duane Allman's solo comes in.' Link

This is just so wrong on so many levels. To my ear, there is smooth continuity throughout, but I was still suspicious so I uploaded the entire song into "Sound Studio," a program that allows one to manipulate digital media. Another feature of that program is being able to "visualize" the sound. I tried to find any unnatural splice in this otherwise seemingly seamless version. I didn't find any but I did come to appreciate the structure of the song. To me it still speaks a language of perfect unity but also respectful division of talent. The song has been analyzed in detail, for example here.

Listen to this portion of the 2003 (non-Dowdified) re-release that starts at the end of Gregg Allman's solo and ends just after Duane Allman begins his solo. This part includes "the dividing line where Duane Allman's solo comes in," where splicing of two different versions is alleged to have occurred:

If you don't already own it, you can hear the whole song at this YouTube here while it's still up. But please buy it. That's Duane Allman's voice introducing the song. His legendary guitar solo begins promptly at the 7 min 47 sec mark and lasts more than 4 minutes. This is the sound that led Eric Clapton to stalk and attempt to lure away Duane Allman for his own. Allegedly, Clapton (along with Tom Dowd) once showed up at an Allman Brothers concert and presented themselves front and center:


Allman was soloing, eyes closed, and head to the sky while the men took their 'seats'. When he looked down and spotted Eric, he froze on the spot, bringing his solo to an abrupt ending. Duane stood dumbfounded on stage, staring down, utterly amazed to see Eric sitting on the grass in front of him. 'It scared Duane to death!' Gregg later said of this brother's peculiar reaction to Eric’s presence. link

Another version of the same story says that Dickey Betts kept playing, picking up Duane's slack but he had to turn his back after he too realized that Clapton was watching them. link  Clapton went on to invite Duane to play guitar for his cri de coeur, Layla. This must have rankled the older Betts. But Duane Allman declined to quit the band, preferring to keep the Allman Brothers intact. Later that year, Duane Allman was killed in a motorcycle accident. Bass player Berry Oakley was killed later on too in another senseless motorcycle accident.  They're buried side-by-side like brothers.*

So who was Elizabeth Reed? According to Betts, she was a name on a headstone at a cemetery where he used to go to be alone and write music. It's so easy for me to imagine that Elizabeth Reed represented some kind of muse because I believe that every artist has some sort of muse at some point. But I think I'm wrong there. I think that Keith Richards had it right:


The early days of the magic of guitar weaving started then. You realize what you can do playing guitar with another guy, and what the two of you can do is the power of ten, and then you add other people. There's something beautifully friendly and elevating about a bunch of guys playing music together. This wonderful little world is unassailable. It's really teamwork, one guy supporting the others, and it's for one purpose, and there's no flies in the ointment, for a while. And nobody conducting, it's all up to you. It's really jazz--that's the big secret. Rock and roll ain't nothing but jazz with a hard backbeat.

In Memory Of Elisabeth Reed was inspired by John Coltrane and Miles Davis. So please spare me the tripe about "Southern" rock being infused with racism. Just look at the Allman Brothers--I mean look hard at them in their time and place.  Again--please buy the song--those guys played their hearts out for us.
__________________
*Update 6/18/17:  Gregg Allman is buried next to brother Duane and Berry Oakley.

Special thanks to meadabawdy for tweeting links to the song: link

Dickey Betts -- along with his son, Duane -- remembers the chords: link

Here is a cool website with old photos lovingly dedicated to the band: link, including photos of the cemetery.

Here is a link to a different version of the same song from a different night/show at the same venue: link
Posted by chickelit at 8:25 AM 3 comments: