Trees And Other Things Indigenous 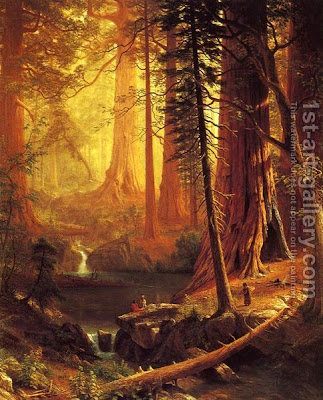 (continued) The explorers continued their quest northwards, seeking the legendary Monterey Bay. As they travelled farther north and further into the fall season, the terrain became more and more lush as the weather worsened. Along the way, several in the party fell ill and had to be carried and cared for by the healthier and stronger. Here they describe setting forth from a point near present day Watsonville.
[text from The Discovery of San Francisco Bay. The Portolá Expedition of 1769-1770]:


Sunday, 15 October [1769] We set out from Laguna del Corral-a name given to it on account of a piece of fence that was constructed between the lake and a low hill in order to keep the animals penned in by night with few watchmen. We marched very slowly so as to cause the sick as little distress as possible; we contrived to carry them on side-saddles, as the women in Andalusia travel. We proceeded for a league and a half and halted near another small pond in the bottom of a narrow and very pleasant little canyon, with plenty of firewood and pasture.
The road was somewhat difficult. We directed our course to the north-northwest, without withdrawing far from the coast, from which we were separated by some high hills very thickly covered with trees that some said were savins.[1] They were the largest, highest, and straightest trees that we had seen up to that time; some of them were four or five yards in diameter. The wood is of a dull, dark, reddish color, very soft, brittle, and full of knots.

Old growth redwoods can still be found south of San Francisco, but only in state-protected enclaves, such Big Basin State Park in the Santa Cruz mountains. I recall many enjoyable hikes there in the late 1990's with my wife as we debated whether to start a family or not (I won the debate).

Years later, we took our kids on a family camping trip in 2005 to the Redwoods National Park which is located in the very northern most part of the state. The trees did not disappoint.
_________________________
[1] Sevins = red cedar. Palomar Mountain, about 35 miles east from us in Oceanside, hosts cedar trees that resemble small redwoods.
Posted by chickelit at 10:01 PM 3 comments:

Some Things Are Just Indigenous to California


Continuing with excerpts from The Discovery of San Francisco Bay. The Portolá Expedition of 1769-1770--[but first, could somebody please straighten me out regarding Spanish orthography? I've read both Portolá and Portolà-which is it?]

The Portola Expedition was the first European land exploration of Southern California. They travelled by foot and hoof from San Diego to San Francisco and many points in between. Along the way, they encountered scores of friendly Indian encampments (villages really). Here are Miguel Costansó's first impressions of those first Americans:


Both the men and the women are of good figure and appearance, and are fond of painting and staining their faces and bodies. They use large tufts of feathers, and hairpins that they put through their hair with various ornaments and coral beads of different colors.

The men go entirely naked, but when it is cold they wear long capes of tanned otter skins, and cloaks made of the same skins cut into long strips, and turned in such a manner that all of the fur is on the outside. They then weave these strips together, making a fabric, and give it the form mentioned above.

The women are dressed with more modesty, wearing around the waist tanned deerskins, which cover them in front and back more than halfway down the leg, and a little cape of otter skin over the body. Some of them have attractive features.

Polygamy is not permitted among these people; the chiefs alone possess the right to take two wives. In all of their towns there was noticed a class of men who lived like women, associated with them, wore the same dress, adorned themselves with beads, earrings, necklaces, and other feminine ornaments, and enjoyed great consideration among their companions. The want of an interpreter prevented us from ascertaining what kind of men they were, or to what office they were designed; all suspected however, a sexual defect or some abuse among those Indians. 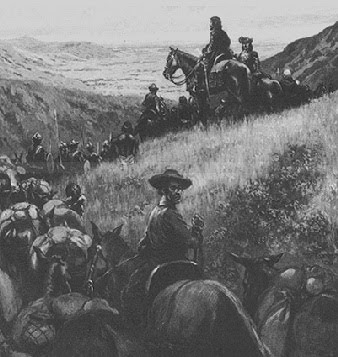 More from The Discovery of San Francisco Bay. The Portolà Expedition of 1769-1770 (the diary of Miguel Costansó). Having crossed the entire Los Angeles basin from south to north (and having experienced several minor earthquakes), the explorers found further progress northwards blocked by a mountain range extending east to west in both directions. They resumed their journey having camped somewhere near the present-day UCLA campus [footnotes are mine]:


Saturday, 5 August [1769]: The scouts who had set out to examine the coast and the way along the beach returned shortly afterwards with the news of having reached a high, steep cliff, terminating at the sea where the mountains end, absolutely cutting off the passage along the shore. [1] This forced us to seek a way through the mountains, and we found it, although it was rough and difficult. We then set off from the Ojos del Berrendo[2] in the afternoon, and, directing our course to the northwest towards the point where there seemed to be an opening in the range, we entered the mountains through a canyon formed by steep hills on both sides. [3] At the end of the canyon, however, the hills were somewhat more accessible and permitted us to take the slope and, with much labor, to ascend to the summit, whence we discerned a very large and pleasant valley. We descended to it and halted near the watering-place, which consisted of a very large pool. Near this there was a populous Indian village, and the inhabitants were very good-natured and peaceful. They offered us their seeds in trays or baskets of rushes, and came to the camp in such numbers that, had they been armed, they might have caused us apprehension, as we counted as many as two hundred and five, including men, women, and children. All of them offered us something to eat, and we, in turn, gave them our glass beads and ribbons. We made three leagues on this day's journey. To the valley we gave the name of Santa Catalina; [4] it is about three leagues in width and more than eight in length, and is entirely surrounded by hills.

__________________________
[1] Pacific Palisades at Santa Monica.
[2] "Ojos de Agua del Berrendo"--Antelope Springs--was a watering place so-named the previous day because the explorers had caught a wounded antelope there.
[3] Sepulveda Pass.
[4] The San Fernando Valley. Santa Catalina is now the name of an island west of Los Angeles.

Sepulveda Pass as it appears today, channeling the 405 freeway: 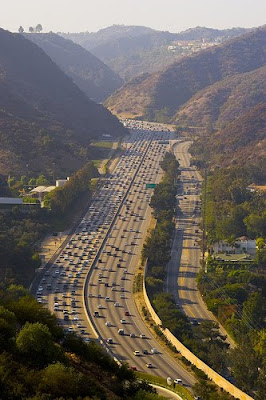