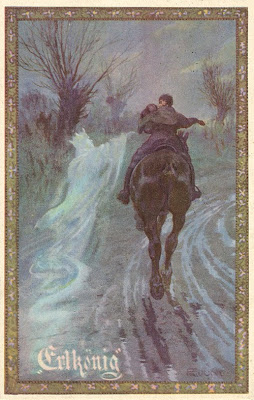 Here is the original text: link

~Johann Wolfgang von Goethe
Posted by chickelit at 9:13 AM 2 comments:

A Conservative Notion of Energy

Non obvious because work seems focused--while heat seems dispersed. It took centuries of sustained effort by thinkers and scientists to get us where we are today: that heat and work are equivalent and can interconvert.  Along the way, one man nearly took his own life for want of attention: Julius von Mayer.  His story involved blood, and indirectly, iron. To him we owe the First Law of Thermodynamics:


Energy can be neither created nor destroyed. It can only change forms


Ludwig Mond was another wealth maker who changed chemistry and in so doing, changed the world. Am I giving him too much credit?  Perhaps. Mond discovered nickel tetracarbonyl--an insidious poison--and turned its making into a process for refining ultra pure nickel--mostly Canadian nickel from the Sudbury Basin. Such nickel went into steel to make armor plating for ships. I'm sure that some still sits in the sunken battleship USS Arizona at Pearl Harbor.* Hardened steel armor was also the reason the US Treasury had to pull nickel from circulation during World War II, replacing it with less precious silver. link

Mond found (by accident) that nickel combines with four molecules of carbon monoxide to give nickel tetracarbonyl,
Ni(CO)4: 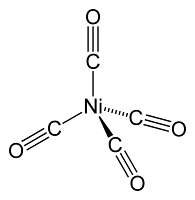 Nickel tetracarbonyl is volatile and can be distilled. In a sense, the four carbon monoxides bear a metal atom aloft. To paraphrase Lord Kelvin: Mond gave wings to metals (I used Kelvin's metaphor to describe how fluorine "gave uranium wings" back here).
________________
*Kruppstahl as it turns out. I suspected this after having seen one of the Arizona's turrets still half submerged in warm seawater after nearly 70 years!
Posted by chickelit at 2:04 PM 4 comments:

What It Takes To Win

Stepping back for a moment from the comfort of my cocoon which eschews hackneyed political "greenery," I asked myself:

What objective indicia would gauge the public's position on things green?

The answer should be an unbiased scientific poll. According to new research out of Stanford (link), it's a little known fact that in past elections, candidates who strongly supported green energy initiatives won. If Republicans and Independents can leverage these ideas in 2012, they'll sweep back into power.
Posted by chickelit at 8:04 PM 1 comment:

The term "Group VIII Metals" refers to the 3 by 3 block of elements boxed in red below, especially in older texts. link  Note that they sit smack dab in the middle of the Periodic Table:

The 3 by 3 array is really three triads: first is the iron triad, comprising downwards iron, ruthenium, and osmium; the second triad is cobalt, rhodium, and iridium; the third triad is nickel, palladium, and platinum. So far in my series of posts about chemical elements, I've ignored the heavier metals, skimming sideways across the top of Group VIII, to get back to the right half of the Periodic Table. The metals below the blue line in the red box are called the platinum group metals: Ru, Rh, Pd, Os, Ir, and Pt. I will come back to them in due time. I know them the best of all the elements I've covered so far.

So why are they grouped together? First, they are usually found together (in nature), because they resemble each other chemically (though each element is of course distinct). Second, their electronegativities are similar to carbon's and to hydrogen's--this means that those main group elements tend to bond more covalently to the metals. Recall my point about the neutral ones--the covalent elements in the middle of a polarity continuum. Organotransition metal chemistry is largely (but not exclusively) the chemistry of those metals with hydrocarbons, hydrogen, and small organic molecules. The platinum group metals, especially rhodium, platinum, and palladium, are found for example in catalytic converters and fuel cells where they bring together disparate elements and catalyze their rearrangements.

One last thing. A lucky man discovered a process which still allows the modern day separation of the platinum group metals. He's the man who first gave metal wings.
Posted by chickelit at 7:07 PM 3 comments:

...specifically, for the nickel found in Sudbury Basin which goes into their Prius batteries. The astrobleme released magma from deep underground when a huge meteorite struck the Canadian shield 2 billion or so years ago. Magma, rich in iron, nickel, copper, platinum, palladium, gold and other precious metals back-filled the crater. Workers on the trans-Canadian Railway first discovered the rich deposits. Bucky balls came from the heavens too: link

Van der Krogt has a fascinating tale of nickel's name--devil's copper--which I don't know whether to believe or not: link.

The meteorite's impact must have caused cataclysmic changes in the earth's weather--it's ironic that Toyota seeks to ameliorate modern day effects using the consequences of an earlier cataclysm.
Posted by chickelit at 10:28 AM 2 comments:

Americans Out-Sequester The World In Carbon

I've come up with a simple formula that allows converting body weight to the corresponding weight of dry ice (CO2) sequestered by an individual. The magic factor is an astonishingly simple factor of 2/3. The conversion factor is irrespective of weight units (lbs or kilos). I derived the number as follows:

American adults sequester approximately 14 million tons of carbon dioxide. That's got to be on par with a decent-sized forest. Note that men sequester more than women because they are heavier and have more carbon.  Obviously Americans -- considered the heaviest of humans -- sequester the most carbon per capita worldwide.

According to my blogger statistics, the majority of my traffic comes from somewhere here.

See y'all on the weekend...