The Somme -- A BBC Dramatization

The focus is on the Thiepval assaults on the first day. Not the usual lefty diatribe, there is plenty of blame to go around -- mostly for the men in trees.


The Somme: From Defeat to Victory challenges the traditional view of the battle as a disaster and reveals how it was on the Somme that the British Army learnt to fight a modern war.

Posted by chickelit at 8:03 PM No comments:

The Somme Then And Now


The assault phase of the Battle of the Somme commenced 10 minutes after the blowing of the Hawthorne mine. The original black and white footage is from a full-length, silent documentary film, The Battle Of The Somme (1916).  That film has been digitized and set back to the original camera speed (something I worried about back here). Watch the original film here. It's lengthy, but worth it.

A couple years ago, two amateur filmmakers skilfully blended past and present cinematography. You won't realize what they've done for a minute or so but then it's incredible! The film is poignant too: Most of these men would be dead 40 minutes after this film was made.


Here is a British TV presentation of the weapon and its excavation at the Somme battlefield in France. Yes it was real and yes, they did find the remains.


link
Posted by chickelit at 3:35 PM No comments:

Landscape Still Scarred Where The Somme Battle Was Fought In France 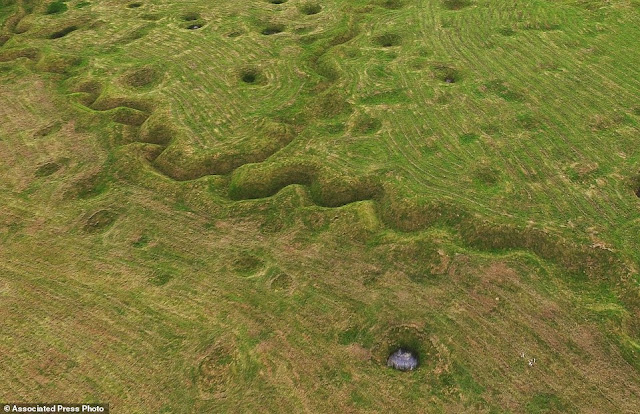 link
Posted by chickelit at 10:38 PM No comments: