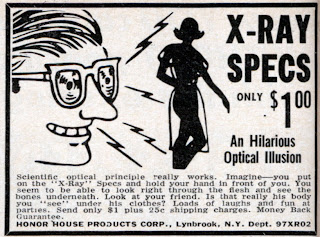 [continued in part from here]

Henri Becquerel and Marie Curie didn't understand the new type of rays they discovered--they just knew it was different. Unlike X-rays, the radiant energy could not be switched on and off (this is what Marie Curie meant by her term "radioactivity"-- something actively giving off rays).

The first clue to understanding radiation came from observing what it took to stop it. Like Roentgen did with X-rays before him, Rutherford also did in a systematic way. He discovered that opaque paper stopped some rays--and these he called alpha rays. A second more powerful ray escaped from behind paper sheathing but was stopped by thin metal foil or glass--these he called beta rays. A third class could be wrapped in many layers of different material and still the radiation leaked through--he called these gamma rays.  A student named Geiger invented the eponymous "Geiger counter" which enabled a facile detection and quantification of these studies.

Only later did he and others figure out that alpha rays were actually alpha particles and that beta rays were really electrons and that gamma rays were like x-rays but more powerful. The juxtaposition of alpha, beta, and gamma radiation gives a nice depiction of radiation being both particle and wave in nature: 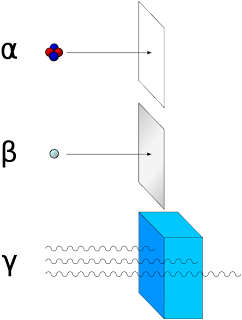 Posted by chickelit at 8:18 AM