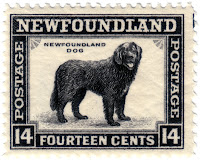 I have no clue whether this is true or not. It makes a good story though. From "The Sinking of the Titanic and Great Sea Disasters," p. 125:


Not the least among the heroes of the Titanic disaster was Rigel, a big black Newfoundland dog, belonging to the first officer, who went down with the ship.* But for Rigel, the fourth boat picked up might have been run down by the Carpathia. For three hours he swam in the icy water where the Titanic went down, evidently looking for his master, and was instrumental in guiding the boatload of survivors to the gangway of the Carpathia.

Jonas Briggs, a seaman aboard the Carpathia, now has Rigel and told the story of the dog's heroism. The Carpathia was moving slowly about, looking for boats, rafts or anything which might be afloat. Exhausted with their efforts, as well as from lack of food and exposure to the cutting wind, and terrorstriken, the men and women in the fourth boat had drifted under the Carpathia's starboard bow. They were dangerously close to the steamship, but too weak to shout a warning load enough to reach the bridge.

The boat might not have been seen were it not for the sharp barking of Rigel, who was swimming ahead of the craft, and valiantly announcing his position. The barks attracted the attention of Captain Rostron, and he went to the starboard end of the bridge to see where they came from and saw the boat. He immediately ordered the engines stopped, and the boat came alongside the starboard gangway.

Care was taken to get Rigel aboard, but he appeared little affected by his long trip through the ice-cold water. He stood by the rail and barked until Captain Rostron called Briggs and had him take the dog below.

________________________
*First Officer William Murdoch, who was in command of the bridge when Titanic struck the iceberg. He commited suicide in front of several witnesses before the ship went down, but that has been disputed.
Posted by chickelit at 12:02 PM