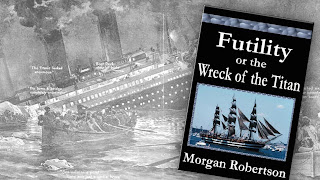 From the preface to Walter Lord's A Night To Remember:


In 1898, a struggling author named Morgan Robertson concocted a novel about a fabulous Atlantic liner, far larger than any that had ever been built. Robertson loaded his ship with the rich and complacent and then wrecked it one cold April night on an iceberg. This somehow showed the futility of everything, and in fact, the book was called Futility when it appeared that year, published by the firm of M F. Mansfield.

Fourteen years later, a British shipping company named the White Star Line built a steamer remarkably like the one in Robertson's novel. The new liner was 66,000 tons displacement; Robertson's was 70,000 tons. The real ship was 882.5 feet long; the fictional one was 800 feet.  Both vessels were were triple screw and could make 24-5 knots. Both could carry about 3,000 people, and both had enough lifeboats for only a fraction of this number. But, then, this didn't seem to matter because both were labelled 'unsinkable.'
...
Robertson called his ship the Titan; the White Star Line called its ship the Titanic. This is the story of her last night.

________________
Robertson's uncanny story is linked here. Futility was republished in 1912 as the Wreck of the Titan. Interestingly, Robertson also "invented" the periscope, and predicted a Japanese sneak attack on the US. He died of apparent suicide in 1915.
Posted by chickelit at 7:42 PM