Splitting the atom in 1938 was something wholly different than what had gone on with radiation since its discovery in 1896. To my mind, the news must have been like expanding the notion of arithmetic from simple addition and subtraction to suddenly include the concept of division. It really blew people's minds at the time. Soddy had explained how elements incrementally transmuted downwards in atomic number (subtraction) by shedding alpha particles and how they transmuted upwards (addition) in number by losing beta particles, but nobody was looking for this:*

In 1938, Otto Hahn and Fritz Straßmann bombarded uranium with neutrons and fished out the products. Neutrons were all the rage after their discovery in 1932 and physicists wanted to know what they did to all types of matter. Enrico Fermi had started this sort of work in Italy, but had been interrupted. It was only a matter of time before someone figured out what was going on. Hahn and Straßmann had expected to observe slightly lighter atoms like radium, actinium, and thorium; instead they observed the much lighter elements barium, lanthanum, and cerium:

As chemists, we must rename [our] scheme and insert the symbols Ba, La, Ce in place of Ra, Ac, Th. As nuclear chemists closely associated with physics, we cannot yet convince ourselves to make this leap, which contradicts all previous experience in nuclear physics. A series of strange coincidences could still prove our results false.

This was the first published account of nuclear fission. Smart people realized that the exact chemical products required that more neutrons were coming out than were going in--this was soon verified and led physicists to realize that Leo Szilárd's chain reaction was now feasable. The news spread like fallout. And because it came from 1938 Berlin, the entire rest of the physics community panicked...and then they organized.**

Read more about the discovery of fission here. 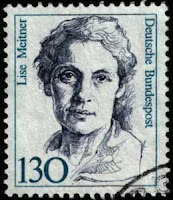 __________________________
*A German chemist, Ida Noddack, had suggested as early as 1934 that "it is conceivable that the nucleus breaks up into several large fragments, which would of course be isotopes of known elements but would not be neighbors of the irradiated element"---but no one took her seriously.  link

**Another frightening fact was that the Austrians had cut off everyone else's supply of uranium from the original Czech mine--the same place Marie Curie had obtained her original samples in 1896.
Posted by chickelit at 2:12 PM