I am largely ignorant of yttrium's benefit to mankind. Element No. 39 sits near the parched southwest corner of the Periodic Table, not unlike the American southwest before the construction of the Hoover Dam. 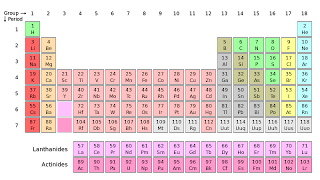 Directly below yttrium in the chart are two pinkish blanks which are place holders for the lanthanides and actinides, two distinct families of elements I'll get to eventually. Yttrium behaves much like the lanthanides below it, another example of periodic rhyming. Yttrium presents in nature only as a trivalent cation, Y3+, as an oxide. Trivalent cations are hellacious electrophiles, meaning that they latch onto—and mostly won't let go of—electron lone pairs. Water is the most common and abundant nucleophile--hence my remark that yttrium sits next to a parched corner of the table--I mean its electronically deficiency. Yet I've heard that such cations, properly supported and kept away from water, react with the C-H bonds of aliphatic hydrocarbons.

Yttrium supposedly has an interesting name (yawn). At least five other elements were named after the same mine in Ytterby, Sweden. Van der Krogt has the story here.

Old color TV screens and computer monitors (CRT) used yttrium to create the red-colored pixels. CRTs are the kind of monitors that shoot beta rays at your face. They really are old school (dependable) technology. Good thing there's usually some thick leaded glass there to stop the beta rays and most of the X-rays.
Posted by chickelit at 12:42 PM