"Don't call it transmutation. They'll have our heads off as alchemists"

The transmutation of elements was an ancient, discredited notion promulgated by alchemy (alchemy is to chemistry what astrology is to astronomy). Alchemists sought to turn base metals like lead into gold. They failed or were quacks and charlatans. And yet transmutation has always occurred naturally and has been practiced since 1917.

Natural transmutation was first discovered when Frederick Soddy, along with Ernest Rutherford, proved that radioactive thorium converted to radium in 1901. At the moment of realization, Soddy later recalled shouting out: "Rutherford, this is transmutation!" Rutherford snapped back, "For Christ's sake, Soddy, don't call it transmutation. They'll have our heads off as alchemists." 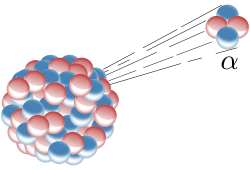 In 1917, Rutherford projected alpha particles from radium decay through air and discovered a new type of radiation which proved to be hydrogen nuclei (Rutherford named these particles protons). Further experiments showed the protons were coming from the nitrogen component of air, and he deduced that the reaction was a transmutation of nitrogen into oxygen:

This was also the first demonstrative proof of artificial transmutation and the proton's existence.  All that was needed now was the neutron which led to division and multiplication.
Posted by chickelit at 8:28 AM