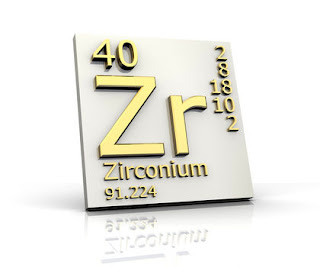 Zirconium has a long, illustrious history in jewelery. The element's name derives from an ancient word for the gemstone, zircon.  The element is more commonly found in cubic zirconia, which--thanks to the Soviet method for making it using the so-called skull process--is cheap and plentiful.

Zirconium rhymes with titanium. Often, such transition-metal family members mimic each other. Zirconium, like titanium, is a valuable catalyst for making plastics. I know--yawn. But catalysis is an intellectually interesting aspect of chemistry--one which has "real-life" analogy--much like status quo and change.

Catalysts are classified as "heterogeneous" or "homogeneous" depending on whether they mix freely with hoi polloi substrates. "Heterogeneous" means that the catalyst stays in a different phase than whatever it's working on--e.g., a catalytic converter working on gas phase exhaust. Homogeneous catalysts swim in a liquid phase like everything else around it--in a single phase.

First generation Ziegler-Natta catalysts were heterogeneous. Catalysis happened at the edges or face of a chunk or pellet.  Obviously, a lot of unused catalyst lies buried inside- and is wasted. Homogeneous catalysts are known for their "atom efficiency"-- a concept that becomes more important for rarer platinum group metals.
Posted by chickelit at 9:42 PM