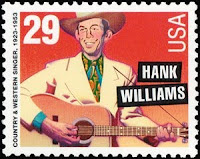 My Letters Home and 50 years of Mytunes series got me to thinking about popular music back in 1952. At the time, the music markets (like most everything else) were still racially segregated, targeting and selling to different markets. Two notable musical artists were at their peak in 1952: Muddy Waters and Hank Williams.

Muddy Waters charted two hit songs that year with She Moves Me and All Night Long, but would go on to greater heights and would inspire an entire generation of white blues artists. Hank Williams had seven successful singles in 1952: Jambalaya (On The Bayou), You Win Again, The Wild Side Of Live, Honky Tonk Blues, Settin' The Woods On Fire, Half As Much, and the eerily prescient I'll Never Get Out Of This World Alive.  Hank Williams died the following year at the age of 29.
Posted by chickelit at 12:37 PM