Sometimes Being Cool Is Just Uncool

Back in 1977, Elvis came through Madison, Wisconsin on what turned out to be his last tour.  My mom and dad went and my dad asked me if I wanted to go too -- my brother was in the navy at the time -- but I declined because at age seventeen, I was just too cool to go see Elvis.

We openly mocked Elvis then. We were just too young to remember what he had done by fusing white hillbilly music with black rhythm and blues. We couldn't see past his bloated 1970's image.  Instead, we paid dearly to go see bands like Led Zeppelin play Whole Lotta Love, unknowingly helping them to pay off the settlement they made with Willie Dixon over plagiarism.  Still, our derision of Elvis never rose to the outright animus of Public Enemy's Chuck D in Fight The Power:

Elvis was a hero to most but he never meant shit to me you see, straight up racist that sucker was, simple and plain, mother fuck him and John Wayne.

Elvis never lost something, even in the months before his death: watch him flash that boyish smile at the 1 min 15 sec mark here in Unchained Melody. Then back it up and watch the whole thing. 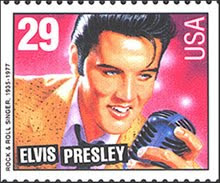 Posted by chickelit at 5:36 PM