Dear Mom, Dad and All,

I suppose you were wondering if I was ever going to write. There was no mail coming or going off the ship so it didn’t do any good to write. We left camp Thursday July 24 by train and got to New Orleans the next day. When we got there we didn’t lose any time getting on the ship. At 4:00 Fri afternoon a navy band saw us off.

The water sure was blue in the Gulf of Mexico. It took us four days to go around Florida. The first night was too hot to sleep.  It’s a lot cooler now though. We went through the Keys of Florida at night, but I did get to see Miami. The only fish I saw were sharks and flying fish. Some of the guys saw two whales.

We have good eats. I haven’t done a lick of work since I been on this tub. 8 days.  We sleep about level with the water. It's crowded but I sleep good. If I’m not sleeping I’m eating. I saw two movies since I been on here. “The Thing” and “I was an American Spy”.

We get the news everyday and hear music over the loud speaker. There’s around 4,000 men and boys on this ship so you can just about guess how big it is. [1]

I sure was surprised when I met Jim P. on here. He’s going to France. He’s in the Air Force.

There’s 3 tank Battalions and 2 air force Batt on here. The Air Force is getting off in France. I won’t get to mail this until we dock in France this Tuesday, Aug 5th. [2] I sure got a sun tan from laying on the deck.

Another thing I saw was 2 big black twisters sucking water in the sky. It looked something like this:

I took a picture of it. I also got pictures of some of the big ships that were in New Orleans going up and down the Mississippi. It rained twice, but no high waves yet. I haven’t felt a bit sick yet. I’ll write again as soon as I can when we get to Germany. I’ll be there by the time you get this.


P.S. We can’t have American money over there. We have to change it to scripts which can be exchanged for Marks. One mark is 25¢.

[An unsent postcard tucked inside the letter]: 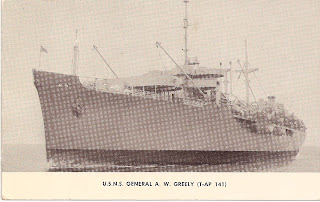 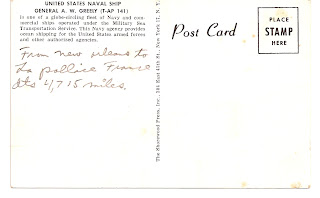 [2]  The post card says La Pallice, France. La Pallice harbor hosted German submarine pens which still exist and were used in the filming of Das Boot.
Posted by chickelit at 7:32 AM