Chemistry is all about electrons. Electrons used to go by old-fashioned names like corpuscles and were once even thought to move like fluids in an ether. So chemistry is really all about atoms and molecular bodies exchanging precious electrons.

When two atoms or molecular bodies get together to react, there's always a donor and an acceptor (of the precious electrons).  Now besides the obvious connotations of donor and acceptor, it also turns out that the electron donor and acceptor parts of molecules have certain shapes. You may have also heard tell about HOMO's and LUMO's but that's getting a bit too technical.  We'll save that for elective or advanced classes. Suffice to say that some molecules can be both donors and acceptors depending on the shapes and energy levels of the coupling partner(s).

Many of the concepts I've just introduced can be illustrated graphically. One of my personal favorites is the simple coupling of H2 with O2 to make water (or steam).  But it turns out that this simple reaction is "forbidden" and so unfit for the present discussion.  Meanwhile, here's a different diagram to wet your appetites: 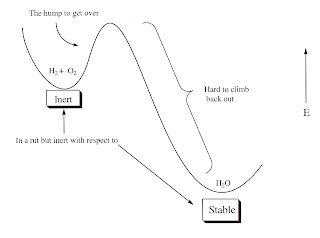 Posted by chickelit at 5:18 PM