Anyone who has cleaned with Windex has whiffed ammonia, a substance with a rich and interesting history that includes its very name: link.  Note that ammonia was once called animal alkali. Muslims-in-science scholars should take note of the origin of the word alkali, but should take care not to get the concept of alkaline bases etymologically confused with that other Arabic word meaning base.

Ammonia gas easily condenses into a liquid when compressed (Albert Einstein and his erstwhile student Leó Szilárd once patented a refrigerator with no moving parts that used ammonia instead of freon). If Szilárd's idea had gone anywhere, he may not have bothered to have conceived the atomic bomb.

Ammonia has been variously depicted as NH3 or better as :NH3 or better still with its electron "lone pair" on full display, as: 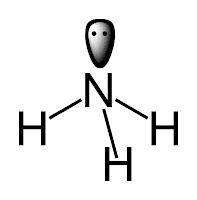 The lobe-like appendage sticking up is called a "lone pair" because there are two electrons in the orbital and because they're not associated with any atom except nitrogen.  Some depictions of ammonia omit the lone pair but here I prefer the "fig leaf is off" depiction.

Ammonia is perpetually in search of an acid to quench its baser instincts. Given a proton like H+, ammonia and the proton instantly couple to make ammonium NH4+ in which all four H's become equivalent. In a real sense, the incoming acid polarizes the other three H's, sucking electrons away from them, making them all more acidic.