"You Are My Medicine" 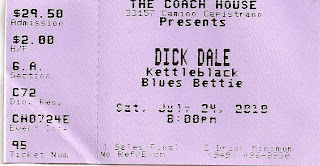 A week ago my wife and I saw Dick Dale play a show at the Coach House in San Juan Capistrano. I dropped a few emotional tweets about the show here, here,  here and here, and even wrote a comment over on Sissy Willis' blog here. I can't add much more. Dick Dale has his own long history and I feel very fortunate to have seen this latest show. According to this reporter, rumors of his imminent retirement are exaggerated. I hope so.

Dick Dale is 73 years old now and has been performing locally since 1955. When he first came onstage he gave a long spiel about fighting cancer and about having to cancel a bunch of upcoming shows, including a tour of Japan. He told the audience "No way could I cancel this show--you are my medicine."

He said that he was running a fever of 102. My wife, who has cared for a lot of cancer patients, could read between the lines and knew exactly what he was going through treatment-wise.  His weakness forced him to sit the entire show but it didn't matter--he played as well as he ever had. We were seated at a table across from a gentleman who has followed Dick Dale since 1961 and he was clearly enjoying this one as much as ever. I'm sorry I don't have a better photo of Dale. I felt drawn to him, wanting to get closer to him more and more as the show unfolded. But the very front was occupied by close friends and family and there just wasn't any way to politely intrude on their space and so I didn't.

What got me emotionally was the obvious bond between father and son onstage. Jimmy Dale, who just turned 18, has been playing onstage with his dad since he was little.  There were times when both father and son would be playing in unison and Dick would take his hands off the guitar as if to say "look no hands" while Jimmy just kept the riff going.  That's amazing.  Such obvious affection between the two.

Dick Dale has a reputation for eschewing drugs and alcohol. He says that he went through the treatments without pain meds. After the show his last words were again "You are my medicine!"  When he stood up after the show, he visibly grimaced in pain and he was helped offstage by his son and another man. We never saw him again.

After the show, Jimmy was hanging around the fans, posing for pictures and signing the usual autographs. I thought of a photo but it was too dark and I didn't have a flash. My wife took Jimmy's hand and told him: "You tell your Dad that he's a great inspiration for cancer patients." He said "I will." 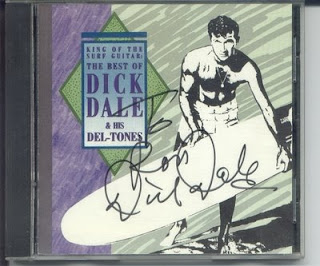 Photo used with permission of Ron
Posted by chickelit at 8:00 AM