Letters Home: "I just got off K.P. What a day for it, on my birthday."

My father quickly settled into the new barracks in Germany. On his birthday he wrote home asking for news. He also described sending gifts home, an adventure, a surprise meeting of an old acquaintance, and a little souvenir that I now have.


Dear Mom and Dad and all,

NELLINGEN CASERN is the name of the camp. It's 12 1/2 miles to Stuttgart. Yvonne N. is the girl I got a letter from, Ilene W's cousin.

Last Thur. and Fri. about 50 of us drove 2 1/2 ton trucks to another camp near Nurnberg. It's 122 miles from here and it took 2 days to make two trips. One kid wrecked his so they won't let him drive anymore. I think we make another trip tomorrow.

The second day I was over here I met Marvin W. in the mess hall. He sure was surprised to see me. He's on a track team and has been traveling all over Europe. He said he was going to Finland in Sept. to run. [1]

We saw some pretty country. I've been to town once so far. You can buy anything you want awful cheap. The only catch is it costs a lot to send anything to the States.  It cost one guy $4.80 to send a music box home by airmail. That's more than the music box cost. I bought a stein (or you could call it a beer mug) with a music box in the bottom that plays the 3rd man theme. [2] It's made out of china so it will be hard to send. It looks something like this. [3]


Payday I will send you a head scarf.  It's got a map of Germany on it hand painted but won't wash out.
I got a letter from M. today too. [4] It took her letter 7 days by 3¢ and yours came in 4 days. How long does it take mine to get there?  You should have gotten two letters from me. One I mailed from France.  I'll send more pictures next letter.

I can't think of much to say as we don't do too much of anything.

Send my drivers license over. I will have to have them to get Eucom License's. So far all I got is a permit to drive.

[2] The theme song from the film The Third Man (1949): link  And here's the Beatles doing the same: link.  The Third Man has the famous scene where Orson Welles says:


You know what the fellow said – in Italy, for thirty years under the Borgias, they had warfare, terror, murder and bloodshed, but they produced Michelangelo, Leonardo da Vinci and the Renaissance. In Switzerland, they had brotherly love, they had five hundred years of democracy and peace – and what did that produce? The cuckoo clock.

I lived in Switzerland for two years and I love Italy so I can relate to that. 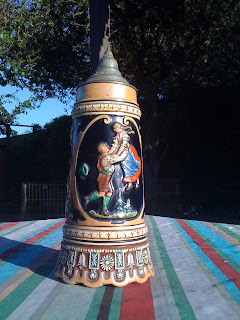 It still plays the The Third Man theme. There's a wind-up mechanism with a little lever underneath that turns it on and off when you pick it up and put it down. My mother gave it to me after my father passed away.  There's a little handwritten post-it note inside that my brother discovered the other day when he was visiting and admiring it. The note says "Bruce's". Though it appears to be in my mother's handwriting, I felt like my dad left it in there for me to find after all these years.

[4] M. is his older sister, who is still living. Two younger sisters and his youngest brother are still alive too.