Michael Haz jogged my memory back here when he mentioned Beaver Bay, Minnesota. The name Beaver Bay (Haz's humorous anecdote aside) dates from the days when that part of Minnesota was the western boundary of the known New World.  The commercial exploitation of beaver preceded the discovery of iron in Minnesota by at least a century and helped establish ports like Beaver Bay (and Duluth) before the days of lumber, grain, and iron ore.

The French were the first Europeans to explore inland (unless of course you believe that there were Vikings in Minnesota). The demand for beaver pelts drew the fur trappers because fierce competition had depleted the beaver populations in the east. The French trappers and traders, known as Voyageurs, expanded their range into the northwest territories of North America. The "Land Of 10,000 Lakes" is hardly an exaggeration and the woods of Minnesota were rich in beaver and other pelts. A canoe/portage  route across the lakes paralleling the modern Minnesota-Ontario border had been known to the Indians for centuries who then showed it to the French. That same route along the chain of lakes is now known as the Boundary Waters Canoe Area and Voyageur National Park.

When I was kid we got National Geographic magazine.  I recall being shown a photo in one issue of a fellow named Don Franklin. Franklin had been part of a historical research team looking for relics and artifacts.  I can't find a link to that National Geographic story but I did find this story written by a historian describing the discovery of some copper pots by a waterfall [it's a pdf file and takes a few seconds to download]. The story corroborates some of what I recall, including a mention of Franklin's role.

According to my dad, Franklin changed his life forever when he saw him swim across the Richland Center community swimming pool using a pair of newly invented rubber swim fins (flippers) sometime back in the 1950's. Franklin was several years older and was a friend of my dad's older brother, J.  I met him around 1975-76 on one of our trips up there.  He worked for Reserve Mining Co. at Silver Bay MN.  He's dead now too as are many of the diving pioneers of the North Shore of Gitche Gumee. 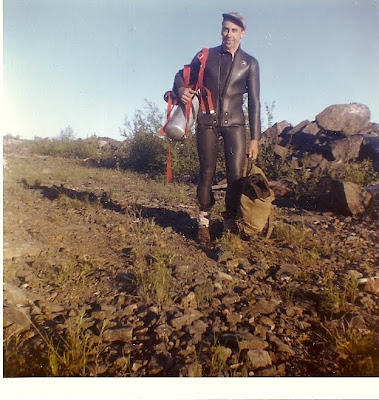 Photo of Don Franklin dated June 1962 taken by my dad. They're probably just a few hundred yards from Highway 61. Note the primitive gear and single tank.
Posted by chickelit at 3:19 PM