Wrecks of the Amboy and the George Spencer

We didn't stay in the town of Silver Bay but travelled further up Highway 61 to a place near Tofte, MN.  There are two wrecks there, one named the George Spencer and the other called the Amboy.  The two vessels were wrecked together during the Mataafa storm, which sank around 30 vessels the night of November 28, 1905.

The Amboy and the George Spencer were wooden ships and both were driven ashore and beached and then abandoned. They both lie (well what's left of them) offshore of private property and are accessible now only by boat. Years ago my dad had permission to camp on the property nearest to the wrecks. You can get a good overview from the photo labelled Figure 266 at this website (I recently ordered that book). The photo shows the beautiful green lawn between the house and the shore where the owner used to let us drive right down to shore and set up camp.

The site of the George Spencer wreck is indicated in Fig 266 with an arrow. Figure 267 in the link above shows a general map of the wreck in the harbor (including some washed up on shore) and Fig 268 shows a detailed sketch of the remaining underwater portion of the wreck. The wreck is decaying fast. I took this photo of what remains of the Amboy's backbone washed up on the shore: 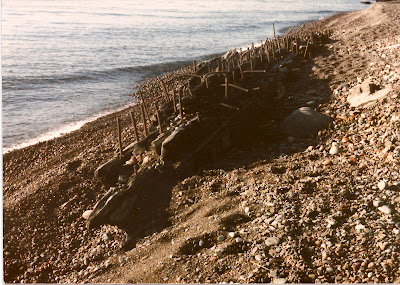 That photo is from around 1975. The wreckage has decayed further since then. I can see further decomposition in this 1992 photo found online: 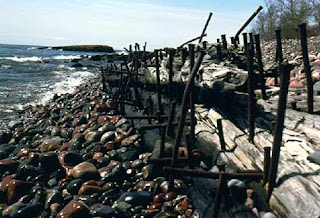 The underwater portion of the wreck in Figure 268 above belongs to the George Spencer.  I found a YouTube video of a family canoeing right over the Spencer: the video gives you a sense of how shallow the wreck is and how clear and still the water can be.

The Spencer was quite photogenic and my dad loved that wreck best for that reason. Here's a shot he took of another diver and his photography equipment circa 1977: 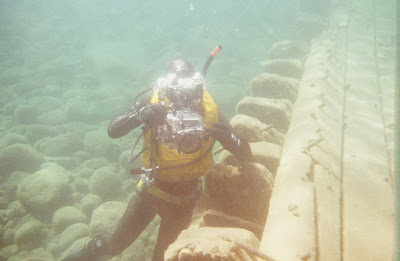 Note how clear the water is which is amazing for freshwater.
Here's a B/W shot that my dad took of me on the George Spencer circa 1977. 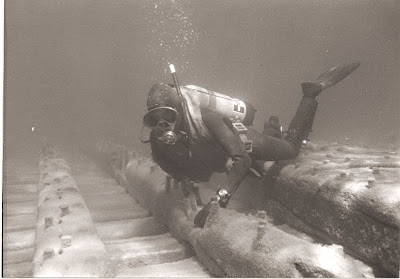 Here's another shot of me from that day. This photo won him first place in an underwater photography competition sponsored by Sport Diver magazine the following year: 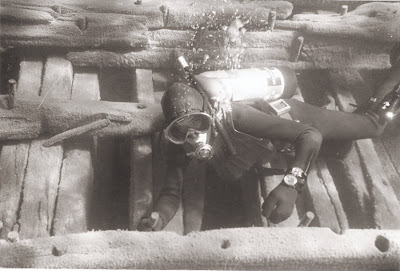 Posted by chickelit at 9:09 PM