Cinque Favole-Numero Uno: Narciso (And The Fountain Of Youth) 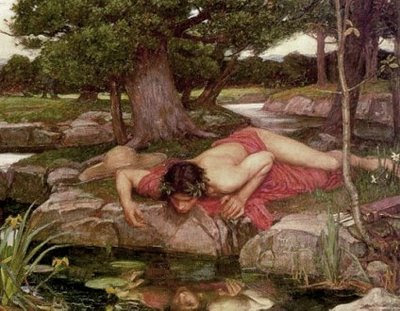 Just a few days ago, Amba tweeted that exercise is like a fountain of youth. About three months ago I began going to a gym where I've been working out doing mostly weight training and cardio. I've seen changes in myself and I'm about one quarter to where I want to be. Not bad considering it took me about 10 years to get to where I'm starting from.

Now like most gyms, the one where I go has lots of mirrors. Those weight trainers (men and women) sure do like to look at themselves. I've never been comfortable looking at myself so much (this may have something to do with how I got to where I am). When I think of mirrors, I automatically think of Narcissus and the origin of narcissism.  Here is an original source of the story which I copied from a book called Beginning Readings in Italian. The story of Narciso comes from Chapter 1 which is a collection of Cinque Favole (Five Fables). According to the book the story originates from the Novellino which first appeared around the end of the 13th Century. The simple Italian language of Narciso is entirely written in the present tense. I plugged the text into Google Translator and got some amusing results: 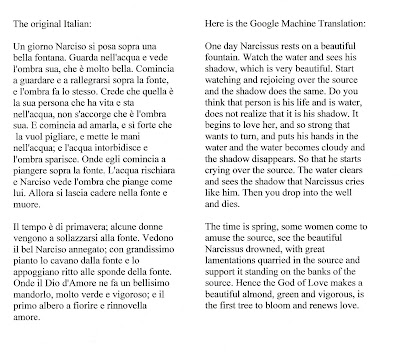 Obviously the machine translation on the right still needs some work and polish. It might be cool to see where exactly the machine language translation fails worst. I took some liberties with punctuation and syntax, trying to make the simple meanings clearer. Here's what I come up with:

It is springtime, and some women come to the spring to amuse themselves. They see the beautiful drowned Narcissus, and with great lamentations they pull him from the spring and support him standing at the side of the well. Hence the God of Love makes a beautiful almond tree, green and vigorous, which is the first tree to bloom and renew love.

Back to narcissism. It is an ancient affliction. Figuratively, Narcissus becomes fatally enthralled by his own image. But what is the real moral of this fable? Don't become too enamored of your own image? I suppose that narcissism turns people inwards and thus away from one another. I also suspect that we are all susceptible to it to some degree. But isn't a certain amount of it a good thing?

Then there's the foreboding warning in W.H. Auden's O Who Can Ever Gaze His Fill (1937):


And slyly Death's coercive rumour
In the silence starts:
A friend is the old old tale of Narcissus,
not to be born is the best for man;
An active partner in something disgraceful.
Change your partner, dance while you can.