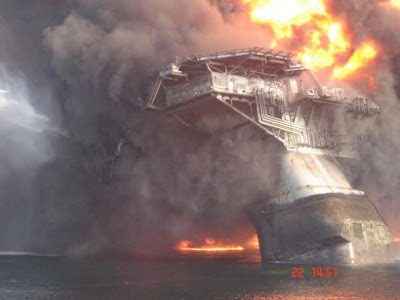 As I write this we're all still watching the horrible oil rig disaster unfold. Here are some spectacular photos of the event via Twitter.

Eleven dead already.  The entire Gulf of Mexico coastline threatened. Is there already talk of this catalyzing a move further away from oil? The fact is that oil and related hydrocarbons are still relatively cheap and plentiful. Or is the whole enterprise just too big to fail?  I worked for a time on a project devoted to making gasoline from natural gas. During this time I became familiar with the business phrase "shutdown economics" which in that case meant that any new technology had to be good enough to make the existing technology unprofitable and pay for the cost of recapitalization.

We'd all like for wind and solar energy to be cheaper. But we're not anywhere close to replacing hydrocarbons.
Posted by chickelit at 6:37 PM