My mother was born in small unincorporated township in Richland County, Wisconsin. Some of her ancestors were good Anglo-Saxon peasant stock, farmers mostly, and some were property holders. There’s a famous geographical feature named after my grandmother's family north of Madison.

Born in 1937, she wasn't a depression child and yet wasn't a boomer.  She had older siblings: two sisters and a brother. I heard stories of others who died tragically: an older sister near her age who accidentally burned to death; two others died in infancy. For quite a time my mother was the youngest in a poor but relatively happy family. But something happened.

I never knew what my grandfather did for a living-itinerant may best describe him. He was a talented gunsmith is all I knew. He left or was kicked-out by my grandmother when my mother was young. The family moved to the small town of Richland Center. She has memories of him meeting her after school and of him carrying her piggyback and giving her treats, and of her mother then taking away those treats.  A reconciliation was attempted around the time that my mother must have been 7 or 8 and two more siblings--twins (a boy and a girl) resulted, but the marriage ultimately failed.

My mom was raised by a single mother in the 1940's and 50's in the days before being a single mother was commonplace.  She babysat her younger siblings while my grandmother worked nights in a restaurant, eventually working herself to any early death. My mother claims that she raised herself, watched over occasionally by older siblings and by a neighbor woman, who was also either divorced or widowed. These women, my grandmother and the neighbor, were key to developing her character. But the misfortunes of others played a role too. As an adolescent, she watched her eldest sister marry, have kids, and then descend into single motherhood by the fault of an abusive and alcoholic husband. She became determined to escape the cycle.

She was fairly good-looking and met my father while still in high school. They dated for a year or two and then married a month after she graduated from high school. She had my brother and me and raised us and then returned to school when I was 8, getting an AA degree in dental assisting (just like Goldie Hawn in Cactus Flower my dad teased her). She eventually ditched the dental assisting.

She outlived my father who died in 1995. She was utterly miserable for a few years but then, five years later, met a wonderful man who became my stepfather.  He's been a wonderful companion for her and he's a millionaire (on paper). My wife says that my mom will now live forever. 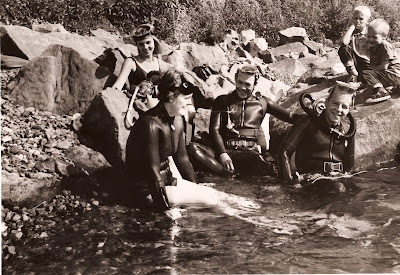 I'm eternally grateful to her for raising me. She made all those untold sacrifices that many women did in her era as a homemaker before the term became somehow pejorative. Of my two parents, she alone was the one who encouraged me to go on to school after high school and she made sure that my father was on board too (he preferred that we boys learn a trade).  She had seen the lasting damages that wrong choices had on individuals and families and was determined not to pass these things on whether by nature or by nurture.

Happy Mother's Day Mom!
Posted by chickelit at 8:37 AM