Letters Home: "Does the clock run all right?" Yes it Does!

Nearly a month passed between my father's last letter home and the one here which is dated May 18, 1952. Apparently what used to be a weekly habit had now more or less become a once-a-month letter home. What happened? I think two things: first, he began telephoning home.  Phoning interstate was still considered unusual in the early 1950's (especially in the Midwest) and it was relatively expensive. Wisconsin Bell was then part of the monopoly AT&T which owned everything: the lines, the switchboards, even the phones themselves. 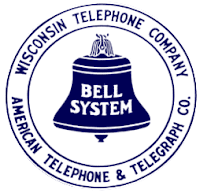 A second factor was that he was home on leave for part of the time in April and May of 1952. When he returned to camp he found it easier to just phone home instead of writing. That situation changed when he finally left for Europe and this will become evident in upcoming posts in this series.  Trans-Atlantic telephoning was still prohibitively costly and so his letters became more frequent again.


I got the money OK.
Sure glad to hear Jr. made it home. How many days does he get off?
We get a 3 day pass next weekend but I doubt if I can make it home. I might try because some of the other guys will pay to ride to Chicago. Does the clock run all right? [1]
It rained awful hard last night. We had an Army Day parade today. [2]
The camp was full of visitors. It looked like rain all day.
I got K.P. tomorrow, so it won’t stop my 3 day pass. I’m due for guard sometime this week.
I owe R. a letter so will send him one tomorrow night.  Has Cub came back yet? [3] He might be up in the north end of town.
If Jr. wants his money you can give it to him. $290 I guess. I must have about $350 in the bank. Maybe I can save some more when I get overseas.
I can’t think of much to write about this time.

[1] I am fairly certain that he is referring to a Kit-Cat Klock that he bought somewhere down in Kentucky or Tennessee and brought home to Wisconsin on leave.  At least, that's the story I heard. 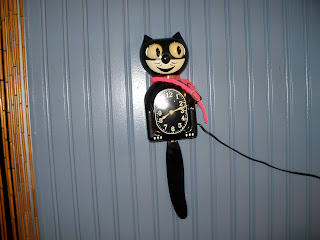 That same clock hung for many years in my grandmother's kitchen after my dad gave it to her.  Many years later it stopped working and my dad took it back, ostensibly to fix it.  But there it sat for several years in my parent's basement. Around 1995 or so, shortly after my father passed away, I appropriated it and had a new motor put in, at a cost of more than the clock is probably worth. The clock itself is only of sentimental value, but it runs great now.

Unlike the newer ones, the clock body seems to be made out of a brittle black plastic. I don't think that it's Bakelite which has that sickly brownish look and which doesn't smooth or polish well. I suspect that it's made of relatively rigid polystyrene. Common soft plastics were still relatively uncommon in the early 1950s, mainly because their raw materials and production methods were still expensive.  This all changed when Karl Ziegler and co-workers discovered what became known as Ziegler-Natta olefin polymerization (coincidentally around 1952).

Another interesting feature of this clock is that the eyes glow in the dark--something which I never realized until just a few years ago during a nighttime power outage. I still haven't figured out how that worked in those days and whether the eyes are painted with a luminescent radioactive paint.