After camping outdoors and living on the side of Highway 61 for five days it was nice to be able to check into a motel and take a shower and get cleaned up before heading out on the long trip home.  My dad's favorite motel was called the Silver Cliff Motel back near Two Harbors. The motel had been there forever.  Here's a photo from 1958 looking much the same as when my parents first stayed there and how I remember it too: 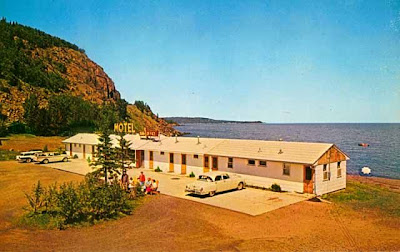 Up there to the left in the photo behind the motel is Silver Cliff, a rock outcropping of geological interest.  Highway 61 used to wind right around it, hugging the rock face and looking something like this view from an old picture postcard: 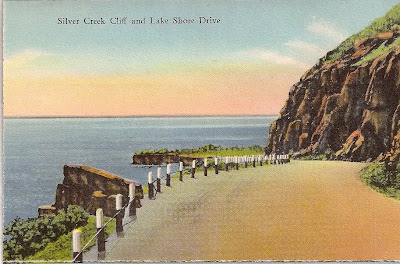 Note the skimpy safety "barrier" (I have a Viewmaster reel from the 1950s that shows essentially the same view). That portion of the road is closed now, but my mother still has memories of a white-knuckled moonlight drive with Don Franklin behind the wheel of his large automobile as he drove my parents to and from the lighthouse that I described back here. Don knew those roads like he knew the wrecks and he probably had a little fun scaring the bejeebies out of the younger folks.

That particular stretch of the road has been replaced by a modern tunnel.  You can see what's left of the old roadway in this photo, along with the northern portal to the new tunnel: 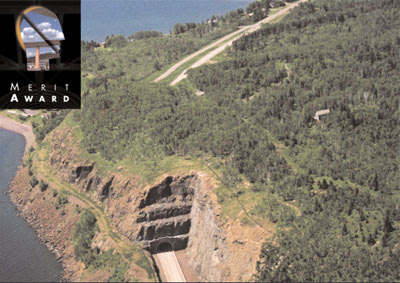 Old Highway 61 hugging the cliff off to the left looks like a pathway slowly being reclaimed by nature. Apparently one can park and walk that old stretch of Highway 61 that was first carved out of the Silver Cliff in the 1920s.

The motel was located behind where the "Merit Award" is affixed to the photo in the upper left. The tunnel project actually won some design awards, mainly for incorporating the natural geological strata into the design: 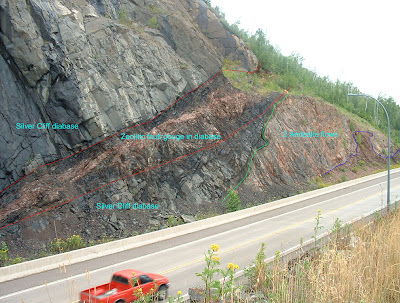 Getting back to the motel. The original Silver Cliff Motel probably became like the Bates Motel when the new freeway went through. I'm not sure at all what's there now: it could be a resort complex or more likely, lake shore McMansions. I suspect the latter.  Here's a photo of the old motel site, including the pebble beach, taken from the old Highway 61. Note the gazebo at the extreme far left, looking out over the lake: 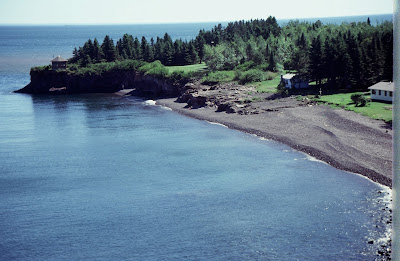 Directly under that gazebo, at a depth of less than 15 or 20 feet, is an underwater natural cave passing from the lakeside to the bay side. It's easily reached by a mask, fins, and snorkel. Now I don't have an underwater photo to prove it-there may be one somewhere in my father's photo collection- I'm still looking for it.  And I haven't been able to find any description of it on the Internets either.  But I remember that cave well.  I know it's there because my father, who had his own way of looking beneath the surface of things, showed it to me.

Posted by chickelit at 1:21 PM