Letters Home: "I haven't written for at least 3 weeks"

I last updated this series over a month ago. My late father wrote letters home to his family while serving in the US Army between 1951-53. They're all arranged in reverse chronological order from the "present" all the way back to boot camp: Link

His writing pace slowed from almost bi-weekly to about once a month and he wrote just eight more times before returning home in September, 1953. One day, augmented by photos, I hope to republish them all together. Meanwhile, I intend to keep posting them here on their originally posted calendar anniversary, time-shifted by exactly 58 years. Happy early Father's Day, pop.

Part of the lapse was his own--here he admits not having written in more three weeks. The young man who was to become my dad was growing apart from his home too. I wish there were more glimpses into what his life was like then and not just for selfish reasons because I am a part of him. His letters are, quite frankly, unremarkable--exactly what people said about the 1950's--especially the mid-1950's. He is a '50's "everyman" and now just a part of cultural memory.

Of course much was going on. He was stationed near the Fulda Gap which was like a Maginot Line between Allied and Soviet forces. East Germany was seething at this time: riots and the subsequent brutal repression culminated on June 17, 1953 in Berlin, just a few weeks away from the time of this letter. Up to a hundred or more people were killed outright (no one really knows) & over a hundred more were later executed and thousands disappeared. But he apparently did not notice, or else he had no real knowledge of events at that time. But the danger was real enough. 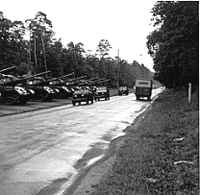 I haven't written for at least 3 weeks. I was waiting for a letter from you. I finally got one today.

We sure are having hot weather, around 90 every day. Last week we went out on the rifle range. I had to haul ammo in my jeep. I got to fire the sub-machine gun for reward. After everyone had finished, I got to help get rid of what was left over. I was shooting at tin cans and most anything I wanted to. [1]

Day after tomorrow I have to go in the field for a week. They are having some maneuvers north of here and 2 jeeps and 2 officers are going. I will be driving one. They have to umpire the maneuvers. [2]

Do you remember what I was doing 3 years ago tonight? Graduating from H.S. It seems like it's been that long too. [3]

I haven't been swimming yet but I took some pictures out at a lake yesterday.

I haven't been going to church very regular. Maybe I will after I get back. I like to sleep Sun. morning too well. Some weekends I have to drive someone. Still driving about 1000 miles a month. Last Fri. I had to take a AWOL to Frankfurt to the guard house. He had been to France.

[3] Military conscription was a kind of "poor man's college" at the time. The original G.I. Bill had recently been augmented. link
Posted by chickelit at 12:09 AM