Factoid for the day:


In the mid-19th century, the suffix -ene (an Ancient Greek root added to the end of female names meaning "daughter of") was widely used to refer to a molecule or part thereof that contained one fewer hydrogen atoms than the molecule being modified. Thus, ethylene (C2H4) was the "daughter of ethyl" (C2H5). The name ethylene was used in this sense as early as 1852. Wiki link

I could blog all day about ethylene, but that factoid was something I didn't know until today. Ethyl has lots of sisters too like Propyl, Butyl (one of the But-sisters), and Pentyl, etc.

Ethylene is ready for her close-up now: 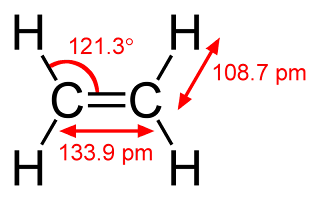