Blessed Are The Wealth Makers


DuPont made a fortune selling things like gunpowder and nitrocellulose to warring governments (mainly to our own) up through and including the First World War. During the roaring 1920s (and flush with cash before the crash) they decided to pursue pure research into material science and established a new division at their fledgling Experimental Station located near Wilmington, Delaware.

The company hired a young PhD chemist named Wallace Carothers to start up a new group. Carothers was fascinated by long chain macromolecules ubiquitous in nature but which had only recently been recognized as "polymers." With the exception of Bakelite, the first synthetic plastic,* other synthetic polymers were unheard of, let alone commercially successful.

DuPont's research gamble paid off and Carothers and his group brought the company enormous success, first with the serendipitous discovery of neoprene, the first synthetic rubber, and then with nylon. Neoprene and nylon were tangible wealth creation: making things of value from what were, at the time, essentially waste products.

Nylon was Carothers' baby. Not only did he invent a synthetic replacement for silk, he purposefully developed a new method of making polymers called step-growth polymerization. He used the same durable type of linkages used by proteins (amide bonds), mimicking nature. Nylon was the first synthetic fabric and was commercialized around 1938, just in time to replace Asian silk which, along with natural rubber, went missing during the Second World War. 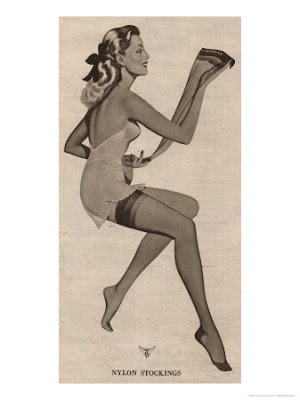 We have a lot to thank Carothers for but he didn't stick around. He checked out early, killing himself in 1937.
______________
* I have two items made from Bakelite: One is a late 1940's era Viewmaster device and the other is my father's old Kit-Cat clock which I described here. Both of these items have the characteristic fragility and tendency to chip common to Bakelite.
Posted by chickelit at 2:48 PM