Letters Home: "We Saw A Parade For Taft" 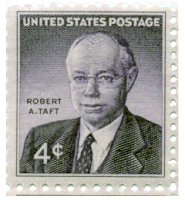 The rather personal narrative of my dad's letters occasionally runs across concurrent American history.  Here is one such letter.  He mentions passing through Chicago on the day before the historic 1952 Republican Convention, a crucial event in mainstream American politics.  It's not clear from his letter if he even knew that the convention was happening--he was never overtly political and being only 19 at the time wasn't yet old enough to vote--but I'm fairly certain that my grandfather was keenly interested in that election, hence the mention of seeing a parade for Robert Taft:

We aren’t doing anything today so I’m resting up, and writing this. I am going to Clarksville Tenn. tonight and get Jr. a muffler for his pickup. It’s 9 miles away. Sure is hot down here today, about 100.  Maybe after I get overseas there will be more to write. The way it is there is nothing new here. We have to go through the infiltration course again. [5] I went through it at Ft. Knox, but you have to do it at least within 3 months before you go overseas. It’s been more than 3 months since I went through it. That’s where you crawl on your back and belly and a machine gun is shooting over your head.

[1] Apparently, he had been to Wisconsin on leave over the Fourth of July and had hitchhiked back to Ft. Campbell.

[3] Hammond, Indiana was another Route 41 town on the southeastern side of Chicago, just west of Gary, Indiana.

[4] Taft was of course Sen. Robert A. Taft, eldest son of William Howard Taft (27th President and later the 10th Chief Justice).  Taft had represented Ohio in the US Senate since 1938 and had twice before sought the Republican nomination. An outspoken critic of FDR's New Deal legislation, Taft often led efforts to curb its excesses, for example, via the Taft-Hartley Act which had overridden President Truman's veto. Taft-Hartley remains in force today. Taft also opposed unchecked deficit spending, high farm subsidies, excess governmental bureaucracy, the National Labor Relations Board, and nationalized health insurance.

Robert Taft was unloved by the eastern Republican establishment, personified by his arch rival, New York Governor (and three-time presidential candidate) Thomas E. Dewey. Taft was harshly criticized in the press for opposing the execution of Nazi War criminals at Nuremberg; he considered it ex post facto law and a precedent that we would later regret. Taft also opposed the Korean War, basing his opposition not on softness towards communism but instead on the way in which the conflict began--Taft simply opposed the usurpation of Congressional War Powers by President Truman. Again Taft called it a precedent that we would later regret.

JFK posthumously lauded Taft (along with seven others) in his Profiles In Courage, calling him "Mr. Republican" and "Mr. Integrity." And while Taft inspired respect from both sides of politics and loyalty from Republican partisans, he was ultimately considered unelectable to the Presidency by his own party.

The outcome of the Republican Presidential primary in Chicago was still uncertain that first weekend in early July, 1952.  Those were still the days when conventions were decided by men in smoke-filled rooms.  Neither Eisenhower nor Taft had a majority of delegate votes needed going into the convention. Each man represented differing factions within the same party, yet nothing seemed to be a deciding factor other than the inchoate "electability" factor of Eisenhower.  And that was just it.  Ike was liked. Well liked. The general had famously rejected candidacy four years before in 1948, despite a nascent and popular "draft Ike" movement. Hardcore Republican delegates were loyal to Taft, but in the end they listened to their constituents.  One-by-one during the next week of the convention they found ways to switch from Taft to Eisenhower.

The following passage is from William Manchester's historical narrative, The Glory And The Dream. Manchester describes the pivotal (televised!) moment as the convention delegates decisively turned against Taft, switching to Eisenhower:


He [Eisenhower] had watched it on television in his suite at the Blackstone Hotel, standing with his four brothers and nervously fingering two good luck charms, a Salvation Army coin and a Boy Scout souvenir. As Minnesota switched, Herbert Brownell rushed up and embraced him. The general’s eyes filled. Too moved to speak, he sought out Mamie for a private moment. Then he picked up a phone and asked to speak to Taft. It was precisely the right thing to do, and he, the presumed amateur in politics, was the one who had thought of it. He asked the senator if he could pay his respects. Fighting crowds all the way, he made his way to Taft’s lair in the Conrad Hilton. Both men were exhausted, stunned and dazed. Photographers begged them to smile. They complied, though Taft was clearly in agony.  He was going through this for the sake of the party, and his devotion to it had never made a greater demand. Though his eyes were bleak with pain, he managed to keep on grinning. He said huskily, “I want to congratulate General Eisenhower.  I shall do everything possible in the campaign to secure his election and to cooperate with him in his administration."

Eisenhower emerged victorious from Chicago and Richard Nixon of California was unanimously selected as his running mate. Of course Ike went on to win the 1952 Presidential election, defeating Adlai Stevenson that November (and again in 1956).

Taft enjoyed a brief stint as Senate Majority leader as the Republicans swept back into power with Eisenhower, but he died unexpectedly of cancer the following year, aged 63.

An inscription at the Robert A. Taft Memorial and Carillon in Washington DC reads:


This Memorial to Robert A. Taft, presented by the people to the Congress of the United States, stands as a tribute to the honesty, indomitable courage, and high principles of free government symbolized by his life.


[5] My dad had described the infiltration course back here.
Posted by chickelit at 2:28 PM