Why Don't People Have More Respect For The Kingston Trio? 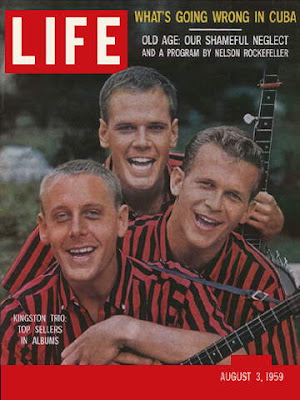 No, sole-surviving original member Bob Shane (middle right) didn't die, but the passing of Nick Reynolds (bottom left) in October 2008 went barely noticed. I checked some of my favorite blogs at the time and nobody even mentioned it.  Then again, I once mentioned that the hills behind my house were on fire and nobody noticed that either. Such things would never happen on Twitter.

The Kingston Trio were a staple of my early youth- circa 1963-64. My folks had 3 or 4 of their vinyl LPs. They seemed like good clean fun--fit for all ages--but did you ever check the lyrics for A Worried Man where Dave Guard sings:


Well Bobby's in the living room holding hands with Sue, Nicky's at that big front door 'bout to come on through, well I'm here in the closet, oh Lord what shall I do?

So why didn't people have more respect for The Kingston Trio?

(1) They were overplayed?
(2) They "stole" songs and generally didn't write their own material?
(3) They weren't left wing enough?
(4) Bob Dylan came along and made them irrelevant?
(5) Never heard of the Kingston Trio.
Posted by chickelit at 10:49 PM