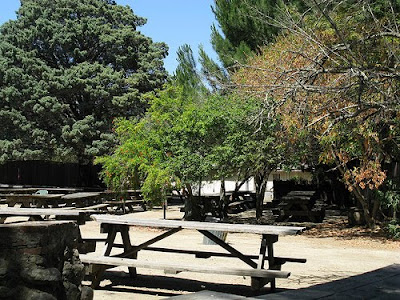 (Photo used with permission of chuckb who did an entire blogpost on Zott's at his blog last year: link)
As I was writing the previous post about the The Kingston Trio, I kept thinking about a bar/slash beer garden in the hills up behind Stanford University now called the Alpine Inn. We lived near there (1996-98) when I had a job in Sunnyvale. My wife and I used to go biking around there in the summer on weekends. One Saturday we pedalled past it and noticed the beer garden. We were suckers for outdoor beer gardens, having spent three years in Germany and Switzerland, so we stopped in for a cold one on our way home. We loved the atmosphere! Pretty soon we were regulars at "Zott's" as the locals called it and were even befriended by some locals who then invited us to their parties up in the hills (one time was so fantastic I'll have to write a separate blogpost on it one day if the topic of abandoned houses and the Chowchilla kidnappings ever comes up).

On any given Saturday afternoon there were many locals and former Stanford types hanging around there. One in particular was a sort of minstrel who led "folk guitar" singalongs. We heard more than a few versions of Worried Man and other Kingston Trio tunes.  Good times.  Zott's was the kind of place you could imagine Ken Kesey hanging out at back in the early 60's before heading back up into the hills to La Honda.
Posted by chickelit at 3:50 PM