Jason (The commenter) posted Galileo's scheme of the known planets ca. 1663 here: link  The scheme shows the relative positions of the planets then visible to the naked eye and telescopes.  Galileo's scheme was in Latin and "glyphs" and is hard to read. Here is a less detailed English version for comparison: 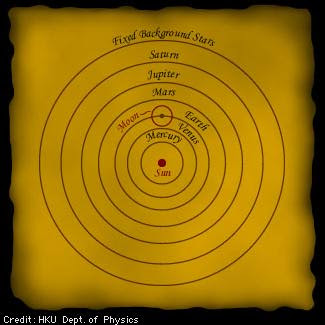 Note that Saturn was the outermost known planet at the time. The map that Jason linked to actually has more detail, including 4 moons orbiting Jupiter, all of which Galileo named (Jupiter now has 63 confirmed moons).  Anyway, the chart reminded me of the Planetenweg (translation: planet trail) which runs along a hill crest west of Zurich, Switzerland.

The Swiss love walking, especially the German Swiss.  From the Zurich train station, the Uetliberg train takes you uphill to a long serpentine park straddling a hill and looking down on the city.  Getting off the train at the beginning of the walk, you are soon confronted with a gigantic yellow sphere on a stick that represents the: Sun.  If you keep on strolling, you come upon a little enclosure housing a tiny sphere the size of a BB that represents the planet Mercury on the same scale.  If you keep on walking, you eventually run into the planet Venus and then the Earth, etc.  The cool thing about the Planet Trail is that the interplanetary distances and sizes are all scaled with one kilometer equal to km = 1 billion km. There are some photos of all the different planets here.
Posted by chickelit at 5:59 PM