Failed Theories: I Must Be Bohred 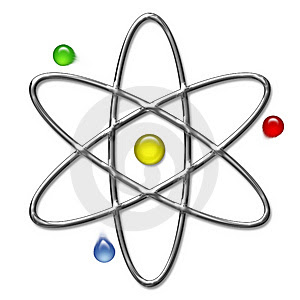 A solar system model was applied to the atom in the early 20th century soon after the discovery of the electron. Tiny little electrons were thought to orbit a little sun-like nucleus.  The so-called Bohr model was easy to visualize and actually kinda sorta works for the hydrogen atom (a 1-electron, 1-proton atom) but the theory breaks down for more "complex" atoms like helium. Despite this failure, the planetary model became iconic for anything atomic.

An important outcome of Bohr's planetary model was the notion that electron "orbits" were subject to a discontinuous numerical progression, i.e., the orbits were "digital" not "analog". Go back and look at the planetary model picture here and imagine that like planets, electrons can only exist at certain regular distances. There is an underlying mathematical logic based in whole numbers for electrons (much like the periodic chart itself).  But in fact, some 18th century astronomers proposed such a model for planets more than one hundred years before the Bohr model for atoms.

Johann Daniel Titius was an 18th century German astronomer who first noticed an unusual order to the interplanetary distances between the then known planets (planet discovery had not advanced much since Galileo and astronomers had become obsessed with comets). As early as 1766 Titius had observed that a simple mathematical formulation predicted the planets' relative distances from the Sun.  He even predicted that a small planet would be discovered at 2.8 au where there was no known planet.

Johann Elert Bode, head of the Berlin Observatory, latched onto Titius's idea and, without crediting Titius, published them. The law become known as the Titius-Bode law.  Here's table showing the actual relative distances of the planets from the Sun and values predicted by the Titius-Bode Law:

Relative Distance From Sun in au

Except for the lack of a planet at 2.8 au, the fit between theory and actual distances is remarkable. I'm fairly certain that Galileo would have embraced Titius-Bode law too, insofar as it was consistent with empirical data at the time.

Two things happened that catapulted Bode to stardom: first, the planet Uranus was discovered by Herschel in 1781. Uranus is beyond Saturn, but is exactly where the law predicted the next further out planet should be. This exciting discovery (Bode was allowed to name the new planet) led to an all out search to find the "missing" planet at 2.8 au. In the words of Titius:


From Mars there follows a space of 4 + 24 = 28 such parts, but so far no planet was sighted there. But should the Lord Architect have left that space empty?

The search was on. The heavens were divided into observable sectors among the international community of astronomers. Then, in 1801, the Sicilian astronomer Giuseppe Piazze found Ceres, the dwarf planet and largest asteroid in the asteroid belt. The calculated orbit of Ceres put it between Mars and Jupiter at a distance of 2.77 au in astonishing agreement with the Titius-Bode prediction of 2.8 au. Ceres is considered to be the largest chunk of a planet miscarriage. i.e, material which failed to accrete into a fully formed planet.  The new data is shown below in bold. These two discoveries amounted to both an extrapolation and an interpolation of the Titius-Bode law:

Few things are as satisfying to a scientist as predicting something which is later backed by experimental data.  The Titius-Bode law was accepted as unexplained fact for a half century.  Its undoing began in 1846 with the discovery of Neptune at a relative distance of 30.06 au~well inside the predicted 38.9 au.  The discovery of Pluto in 1930 did not bode well for the law either. Pluto was found well out there at 77.2 au versus a predicted orbit of 39.44 au.

I know, I know: eccentric Pluto was downgraded from planetary status in 2006 and deemed extrasolar in origin and so shouldn't count. But that still leaves Ol' Neptune.

Today, Titius-Bode "theory" is regarded as a historical curiosity.

Posted by chickelit at 9:39 PM