Car doors slammed in the summer morning, jarring me awake.  Looking out my window, I saw cars quickly lining the curbs and people gathering at a neighbor's house a few doors down. I went out to investigate.

A strange truck was parked in front of the M. family's house. "Earl Culp & Sons, Auctioneers" read the signage on the truck's door.  I quickly figured out what was going on. The strangers were buyers who had come for an auction. A neighbor had died and an estate auction was in action.

My neighbor, Mr. M., had been a professor at the local university.  Thinking back, I still picture him as Dr. Quest from the cartoon Jonny Quest--right down to the red hair and beard.  We kids never thought to call him professor or doctor--only just Mr. M.  For one thing it would have been incorrect and improper to call him by those other titles because at that time and place we only called medical doctors "doctor".

By that June of 1978, Mr. M had been dying of cancer for a year or two, slowly thinning and weakening, and finally he died. Before that, I used to see him at the local diner where I worked part-time after school. He had many friends with whom he used to share coffee and good times. Mrs. M. had been mentally ill for several years and was "hospitalized." My mom met her when we moved into the neighborhood in the early 1960's -- before she really went downhill. Mrs. M that is. My mom said that Mrs. M. had started hearing voices and that she suffered from dementia.

The M. family loved the outdoors. They kept a small pop-up tent trailer in their double garage and they had a canoe which hung next to it on the wall.  Sometimes at night walking by, I caught a glimpse of a telescope and model aircraft through an unshaded window.

The auction was necessary to sell the M's remaining belongings. After registering with the auctioneer, the buyers circulated among the furniture and household items which had been moved from inside the house to the front lawn. Much of the stuff must have had personal value to the M. family--the kind of stuff one sees at a garage sale. Several folding tables had been set up and were heaped with various groupings of household items sorted into lots of three, four and five related items.  My attention fixed on one particular lot comprising a silver teapot, two collector's liquor decanters, a ceramic planter, and some pieces of home made embroidery.  I looked around at the buyers and waited for the auction to begin.

Many buyers, having arrived in the early cool of the morning, sought shade as the full noon sun began to beat down. It must have been 90 degrees in the shade. The house was open and so I went inside for the first time in my life. Only my mom had been inside before--she used to have coffee in there with Mrs. M.  Most of the furniture had already been moved outside. Only the bigger and heavier items were left inside. The single storey house had a big picture window that looked down on a backyard. I walked over to it and looked out.

They had a very private backyard--it was ringed by enormous pine trees and bushes so thick that they secluded the grassy area in the middle. From inside the house, that space looked like a clearing in a pine forest. Just beyond the ring of pines and bushes stood an enormous solitary oak tree--so old that it pre-dated the entire neighborhood. The tree was actually not on their property but stood just outside it. When I was kid there was open field back there so we didn't have to trespass to get to the tree. That oak was the biggest and best climbing tree in the neighborhood. Someone long before had nailed boards into the trunk so that we could actually get up into the thing. The oak rose higher than the bushes and pines ringing their yard and it too looked down on the grassy middle that I was looking at. I had seen that same grassy space from a perch in that oak as a much younger child.  I'd even been in that grassy space once or twice with other kids when we snuck in there when we thought nobody was looking, just to look at the concrete-lined fish pond where they kept goldfish year round [a koi pond?]  We'd never seen anything like that before in Wisconsin--especially in the 1960s.

I thought back to how we used to play on that tree as kids. Because of the slight slope to the yard, the picture window was about level with where I used to sit and play in that big oak. The perspective was different--when I was kid I could see the window I was looking through now from the tree but I couldn't see inside the house.  Now, years later, I was looking through that window at the same tree across the same yard where I used to perch.

The auctioneer snapped me back to attention and I so went back outside.

One of the Culps (maybe the old man Culp himself) started the auction promptly at noon. I had been to but had never bid at an auction before and was excited. Buyers quickly gathered around the first table heaped with various household articles. The auctioneer began chanting:

One by one, each household lot was sold; some buyers moved away, having bought their target lot; others moved in, bidding on different lots. I stood back watching, listening to the auctioneer's chant. Each table was bought clean, leaving behind a barren surface and the stark legs of the folding table. I circled among the buyers and around the other tables still laden with things, always keeping my eye on "my" lot, patiently waiting. At last the bidding moved to my table and to my lot. I quickly bid, then again, then waited while the last round of bidding circled the table. The auctioneer nodded to me and I was pleased with the bargain and moved to the shade of a tree to watch the other buyers and to rest.

Near the end of the auction, Mrs. M. arrived with her son John. I hardly recognized them and hadn't seen either of them in years.  The M's were both older than my parents and their kids were in high school when we were little so we didn't play with them at all.  Pale and weakened, Mrs. M. walked with difficulty, steadied by John.  She had an ace bandage wrapped around her head and she moved unrecognized among the buyers, talking softly to herself while her son spoke softly to her as if to comfort her and also, perhaps, to calm her. They stopped in front of a large queen-sized headboard made of carved dark wood that a young couple had just bought.

"How much did the bed sell for?" asked Mrs. M.  A young man, not knowing at all to whom he was speaking, confided his bargain. Mrs. M. just shook her head and looked confused, but her son whisked her away before she could protest. Mother and son then continued to survey the auction, their identities known to me and perhaps a few others. They didn't recognize me at all.

And so the M. family's possessions were sold and scattered: one couple struggled to load a heavy dresser while another carried away the living room sofa. At the day's end, the house stood empty looking even more hollowed out. The buyers departed, returning to where they had come from. The house itself was eventually sold to a young family.  I remember feeling a little sad afterwards--enough to write down a few details so that I wouldn't forget.

[Now I sometimes worry that guys like my neighbor, Mr. M., guys who did all the brain work in the '60s that we all take for granted will just dry up and disappear one day. And all that will remain will be a headstone in some cemetery] 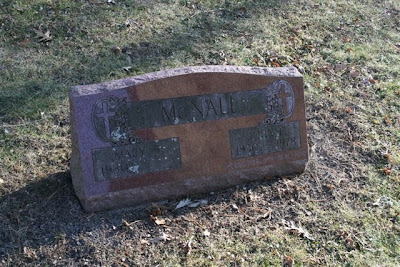 Posted by chickelit at 6:32 PM