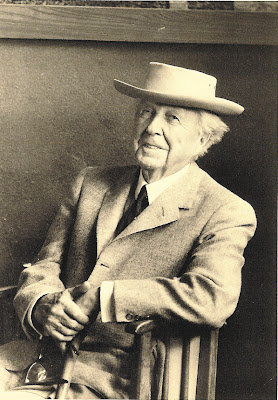 My stepfather told me a great story.  In 1948 he was working at a department store on the Capitol Square in Madison. In those days, there were no malls and all the major stores were still downtown on the Square. My stepfather was about 18 or 19 and was working his first job. He worked on the third floor where dry goods were stored and unpacked before moving them down to the retail space on the ground floor and second story. It sounds kind of inefficient but the customers didn't want to climb to the third floor (where it was also hotter in the summer) and so it was used in lieu of a basement for storage.

One day, a rather odd-looking man (a dapper Dan my stepfather called  him) came in with a couple other younger guys. My stepfather's supervisor nudged him and said:

"Hey you know who that is?"

Wright had driven over to Madison on Highway 14 with a couple students and was shopping for housewares for the school he ran back in Spring Green. Wright was dressed in a full-length overcoat and "that hat" (my stepfather called it a "sombrero" and recognized "it" when I showed him the photo that I pasted in above).  [Aside: I'm not sure if that hat was really so different from what other distinguished men wore at the time-Robert Oppenheimer for example was famous for his pork pie hat--so famous that the journal Physics Today honored him by posing a photo of just a pork pie hat for its cover in 1948 (link)].

Wright must have been about 80 years old in 1948. He came up to the third floor, avoiding the retail space and went to where houseware items were stored.  Wright carried a cane too and used it to point out things that he wanted as he moved amongst the shelved housewares. He selected three or four wicker basketfuls of dishes--cups, saucers, plates, silver, cookware, etc. My stepfather watched him and then packed up the stuff for him. Afterwards, his boss nudged him again and said:

"Watch, I bet they make him pay in cash."

And they did. Wright had an awful reputation for not paying bills. It seems that in his lifetime, the little people were never grateful enough to forgive him his pecuniary trespasses. Just as well. The townspeople in Richland Center dithered for decades before deciding to even recognize their native son. They still haven't put up any kind of civic memorial that I know of--they're still waiting for the memory of unpaid debts to fade.  So far as I know, the best memorial is the one Wright made himself: the old German Warehouse, which I saw and wondered at many times as a kid when we visited that town.

Posted by chickelit at 4:03 PM