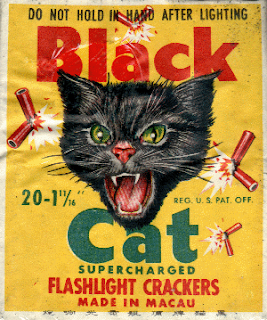 Its sure been hot here for the last week ever since I’ve been back. I’ve been going swimming everyday for a week. It’s too hot to work so we get the afternoons off.

We found out today we are going to Germany for sure. How’s Jr. getting along at McCoy? Have him ask Erwin where Cecil is stationed over there.  Nothing new has been happening here lately. We got prisoner guard coming up the 21st that lasts a week. I suppose all us new Duces will catch it. [1]

We get a long weekend over the Fourth of July. I might send some firecrackers home. We can get all kinds of them. [2]


Has Dad found a car he wants yet? I think he should trade for a new Ford or Chev. [3]  Has Jr. done anything to the truck yet? I mean the old Ford. What all was wrong with the hot rod?


This is all for this time

[1] "new Duces"?  I can't find the origin of or reference for this term.  Here is a scan of the original letter: 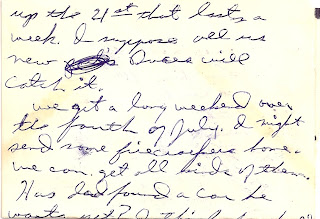 up 21st that last a
week. I suppose all us
new pals Duces will
catch it.
We get a long weekend over
the fourth of July. I might
send some firecrackers home.
We can get all kinds of them.
Has dad found a car he
wants yet?

If anybody can suggest a meaning I'd sure appreciate knowing it.

[2] My dad stopped at roadside fireworks stand in Tennessee on our epic Highway 41 roadtrip. I remember gawking at all the fireworks for sale: firecrackers, cherry bombs, bottle rockets. They sold them to pretty much anyone too. A couple years later I saw the same thing in South Dakota on a family vacation to the Black Hills.

Fireworks laws in Wisconsin are very restrictive. I wonder where this stricture came from exactly and it's interesting that it was already there in the early 1950's.  I'm speculating that it dates from the "do-gooder" days of Progressive politics in Wisconsin where civic-minded people sought to protect people from themselves. Fireworks are dangerous. I almost blew a couple fingers off as a teen when a string of firecrackers I was holding went off in my hand.  Yet still the lure of blowing things up with minature sticks of dynamite was too much to resist.

[3] "Chev."  I wonder what General Motors management would think of that abbreviation. If I recall, my dad and his brothers never said "Chevrolet" and rarely "Chevy"; instead they said "Chev" and pronounced it "shiv". Back then there really only were domestic cars available. But like so many men of his generation, my dad never owned a foreign car make. I'm not sure he ever even drove one.  He did own a couple GM cars, but he mostly stayed loyal to FoMoCo products, especially the Mustang.  It's not like he loved American-made stuff per se--he was a fan of Wal-Mart too and the "cheapest available".  But with cars it was a like a line in the sand.  He had brothers who worked at GM and Chrysler, so maybe he never wanted to face their scorn and derision.