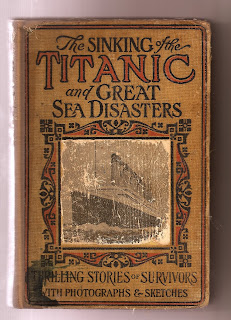 My grandmother had that book and I loved it so much as a kid that she gave it to me. Logan Marshall's The Sinking of the Titanic and Great Sea Disasters was rushed into print in 1912 shortly after the disaster. Inside are several accounts of survivors, some of whom later became immortalized in the movie Titanic (which I won't link to out of spite for James Cameron).

Jack Thayer was 17 and travelling with his parents. His wiki bio is here.  He was first to insist that the Titanic split in two when she went down. Here are the drawings that Thayer made while on board the rescue ship Carpathia and his description of the Titanic's final moments as published in 1912: 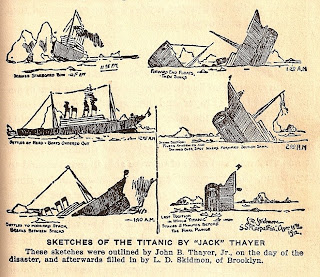 ...I jumped out, feet first.  I was clear of the ship; went down, and as I came up I was pushed away from the ship by some force. I came up facing the ship, and one of the funnels seemed to be lifted off and fell towards me about 15 yards away, with a mass of sparks and steam coming out of it. I saw the ship in a sort of a red glare, and it seemed to me that she broke in two just in front of the third funnel.

This time I was sucked down, and as I came up I was pushed out again and twisted around by a large wave, coming up in the midst of a great deal of small wreckage. As I pushed my hand from my head it touched the cork fender of an overturned life-boat. I looked up and saw some men on the top and asked them to give me a hand. One of them, who was a stoker, helped me up. In a short time the bottom was covered with about twenty-five or thirty men. When I got on this I was facing the ship.

The stern then seemed to rise in the air and stopped at about an angle of 60 degrees.  It seemed to hold there for a time and then with a hissing sound it shot right down out of sight with people jumping from the stern.  The stern either pivoted around towards our boat, or we were sucked toward it, and as we only had one oar we could not keep away.  There did not seem to be much suction and most of us managed to stay on the bottom of our boat.

Thayer's theory was dismissed for 70 years until Robert Ballard used his account to help locate the wreck--which he found in two pieces--just as Thayer had said.

For those who have kids: some little models used to be commercially available that reproduce the exact way that the ship sank: link. I own one.  Fun for the kids and grown-up kids alike.
Posted by chickelit at 9:46 PM