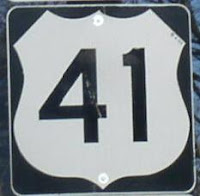 I made it back Sunday afternoon at 2:00. I was going to call up at 9:00 Sat. night from Evansville, Ind. but it took me a couple of hours to find a room for the night. I finally found one, a boarding house. Evansville is only 125 miles from here so I made good time Sat. [1]

Sure has been hot here- today 95 or 100.  I mowed a little grass today and I didn’t do anything in the afternoon. [2]  From 7 to 8 in the mornings we have P.T. and Dismounted Drill. [3] Tomorrow we are supposed to play baseball and go swimming.

Still going to Europe. Leaving from New Orleans. I don’t think they will change the plans now.

What is R. going to do with his Hot Rod? How is the Mercury running? It’s about time the oil was changed in it.

I guess this is all the news for this time. Nothing much happening here lately.  I sure miss the car.

[1] My dad must have driven his car back north for safe-keeping and then hitchhiked back to camp. He would have never stopped 2 hrs short of his goal if he had been driving.   Evansville, Indiana is an Ohio river town on US Route 41, which at that time was a main North-South route in the days before the Interstate Highway System. Congress didn't authorize the interstate system that we now depend on until 4 years later during the Eisenhower administration. Railroads were already dying and Ike was a big proponent of interstate highways having seen firsthand the German Autobahn system during WW II.

16 years later, in 1968, my dad took us on an epic family station wagon vacation to Florida (really we were just along for the ride on his dive trip to FL :). We followed old Route 41 for most of it with stops at Mammoth Cave KY, Chattanooga TN, somewhere in south Georgia, Weeki Wachee FL, Miami, Key West, Daytona, etc... I'm thinking of blogging a series about that epic vacation after I learn to slice and dice some 8 mm footage that I had converted into DVD format. Maybe I'll even record voice-over narration.  There are some photos somewhere too from that trip--probably in my brother's basement which I need to snag.

[2] Did you know that hair (like grass) grows faster in the summer?  I heard this from a barber once and thought little of it until I sat down to write this. Speaking of mowing lawns, we recently bought one of these.  I had procrastinated for years about getting a cordless electric mower. It's not the one I wanted which is a Bosch lithium ion battery mower, but my wife got fed up with the waiting and just bought it. My son now loves mowing the lawn.
[3] Dismounted Drill and P.T. (physical fitness testing).
Posted by chickelit at 12:14 PM