Carbon dioxide is like the burned-out skeleton of a once juicy hydrocarbon. Drawing out the Lewis structure, the double bonds remind me of the radius and ulna bones in the forearm:

Soft tissues (which are mostly water) show up as lighter shadows in X-rays. Magnetic Resonance Imaging (MRI) is a complementary technique that locates water's hydrogen in soft tissues. And that's exactly what's missing in CO2--all the hydrogen. Hydrocarbons get all the hydrogen and electrons sucked out of them when they burn, transferring them to electronically rapacious oxygen:

Of course plants and bacteria carry out the reverse reaction, converting CO2 to sugars, but it's possible to synthetically convert carbon dioxide into methanol or even methane using dihydrogen: 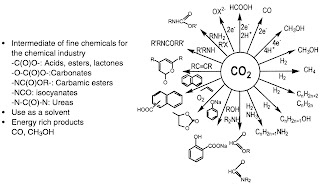 But making hydrogen requires energy too.  Making nitrogen fertilizers uses lots of hydrogen, so those serious about fuel supplies will also have to worry about food supplies.  I just wish the same people who talk about shutting down industries and exacting revenge would instead busy themselves with showing that alternatives can be successfully commercialized, because if they can't there's little sense in using them. Energy independence will not come from government investing in unworkable alternatives.  Energy independence can only come from the use and exploitation of domestic energy sources and this includes coal. Oil and related hydrocarbons are intrinsically cheap.  If we decide to move away from them because we don't like or can't shoulder the associated problems, e.g., keeping the free flow free, we'd better prepare for somebody else doing the dirty jobs. And to the winner goes the spoils.
Posted by chickelit at 3:50 PM