For What It's Worth: I Saw A Buffalo Springfield

Well not the Buffalo Springfield.  I did see an old Buffalo-Springfield steamroller today at the Antique Gas & Steam Engine Museum in Vista CA: 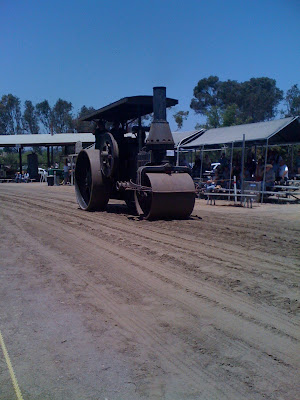 The parade MC said that the Buffalo-Springfield was one of just a few remaining working examples of something once so commonplace that it gave rise to a verb: "to steamroll".

And the band really did take their name from that machine. So there's this:


That's Neil Young plucking those harmonic pings in the background. You can see him behind frontman Stephen Stills in the very beginning and again when it cuts out at 1 min 13 s.  Sorry that the video cuts out like that.  If anybody knows a better link to the whole Smothers Brothers version of the song, please link in the comments.
Posted by chickelit at 4:31 PM