A Brief History Of Earthquakes In Los Angeles 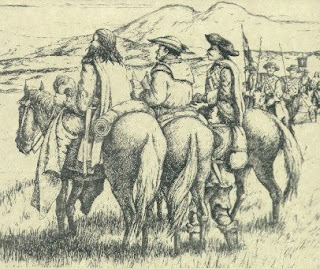 A while back I blogged some excerpts from a wonderful book called The Discovery of San Francisco Bay:  The Portola Expedition of 1769-1770.  The book is a translation of the diary of Miguel Costanso who was a soldier/engineer along that historic expedition up the coast of Southern California.  I love the book's vivid description of the physical geography of Southern California, which must count as the first written description. Costanso wrote a description of the valley where we live which I already blogged about here.

We been having more earthquakes than usual lately.  They have been medium-sized and located quite a distance from here.  Nevertheless, I decided to revisit the Portola Expedition because I recall how vividly he described the earthquakes in the L.A. basin as they passed through that summer in 1769. Turns out earthquakes occurred daily.  Here are his descriptions; the notes are partially from the book and partially mine.


Friday,  July 28 1769--From Santiago we went to another place of which the scouts gave us particulars. It was not far, in truth, since we arrived after an hour's march. It was a beautiful river, and carries great floods in the rainy season, as is apparent from its bed and the sand along its banks. This place has many groves of willows and very good soil, all of which can be irrigated for a great distance.

We pitched our camp on the left bank of the river. To the right there is a populous Indian village; the inhabitants received us with great kindness. Fifty-two of them came to our quarters, and their captain or cacique asked us by signs which we understood easily,  accompanied by by many entreaties, to remain there and live with them. [He said] that they would provide antelopes, hares, or seeds for our subsistence, that the lands which we saw were theirs, and that they would share them with us.

At this place we experienced a terrible earthquake, which was repeated four times during the day.  The first vibration or shock occurred at one o'clock in the afternoon, and was the most violent; the last took place at about half past four. One of the natives who, no doubt, held the office of priest among them, was at the time in the camp. Bewildered, no less than we, by the event, he began, with horrible cries and great manifestations of terror, to entreat the heavens, turning in all directions, and acting as though he would exorcise the elements. To this place we gave the name of Rio de los Temblores. [17]

[17] "Earthquake River" The river became known as the Santa Ana river.  Their campsite was east of Anaheim, near present day Olive.


Sunday, July 30--We left Los Ojitos, [18] where there was another earthquake of no great violence, at half-past six in the morning.  We crossed the plain in a northerly direction, steadily approaching the mountains. We ascended some hills which were quite rugged and high; [19] afterwards we descended to a very extensive and pleasant valley where there was an abundance of water, part of it running in deep ditches, part of it standing so as to form marshes.  This valley must be nearly three leagues in width and very much more in length.  We pitched our camp near a ditch of running water, its banks covered with watercress and cumin.  We gave this place the name of Valle de San Miguel. [20]  It is, perhaps, about four leagues from Los Ojitos.  In the afternoon we felt another earthquake.

[18] "Little Springs" Present day La Brea Canyon, north of Fullerton.
[19] The Puente Hills, probably on the route now followed by Hacienda Boulevard.
[20] Now called the San Gabriel Valley. The camp was near the community of Bassett.


Monday, July 31---We left the camping place at seven o'clock in the morning, and crossing the ditch over which we had to lay a bridge on account of the depth, we traveled for two leagues to the west-northwest through fields of dry grass and thickets, which detained us for a long time as it was necessary to clear a path at every step. We crossed a very muddy stream and camped farther on in an open clear spot in the same valley, and close to a gap which was seen to the west. [21]  At half-past eight in the morning we experienced another violent earthquake.

[21] They camped north of the Whittier Narrows.


Tuesday, August 1---We rested today, and the scouts went out to explore the country.
At ten o'clock in the morning there was an earthquake, which was repeated with violence at one o'clock in the afternoon; and one hour afterwards we experienced another shock.  Some of the soldiers asked permission to go hunting mounted on their horses and others to go on foot, with the intention of killing some antelopes, as many of these animals had been seen.  They are a species of wild goat with horns somewhat larger than those of the goats. These soldiers, on their return, said that they had seen a river of fine water--from sixteen to seventeen yards wide--that rises near the gap of the valley to the south, and at the foot of a low hill that was in sight of our camp, and, at the most, half a league distant.

Wednesday, August 2--In the morning we broke camp, and travelling towards the west, we left the valley by an opening formed between low hills.  Later we entered quite an extensive canyon containing many poplars and alders, among which a bountiful river flowed from the north-northwest, and turning the point of a small steep hill it afterwards continued its course to the south. [22]
To the north-northeast one could see another watercourse or river bed that formed a wide ravine, but it was dry. [23] This watercourse joined that of the river, and give clear indications of heavy floods during the rainy season, as it had many branches of trees and debris on its sides. We halted at this place, which was named La Porciuncula. Here we felt three successive earthquakes during the afternoon and night.

[22] They were at the Los Angeles River, approximately where North Broadway bridges the river. The "small steep hill" is the southeastern portion of Elysian Park--about three-fourths of a mile east of Dodger Stadium.  Elysian Park as is looks today: 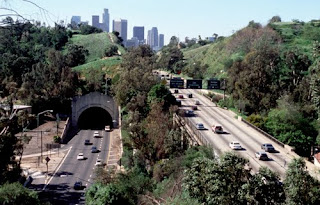 [23] Arroyo Seco
Juan Crespí, a Franciscan padre along on the trip, named the river El Río de Nuestra Señora la Reina de los Ángeles de Porciúncula, which translates as The River of Our Lady Queen of the Angels of Porciuncula. This the origin of the name Los Angeles.  There's an interesting story behind that name which goes back to St. Francis of Assisi which you can read about here.


Thursday, August 3---We forded the Rio de la Porciúncula, which descends with great rapidity from the canyon through which it leaves the mountains and enters the plain.  We directed our course to the west-southwest over high level ground and, after a march of three leagues, we reached a watering-place, to which we gave the name of the Ojo de Agua de los Alisos. [24] This was a large spring situated in a marshy place where there stood some alder trees of very large girth; the marsh was covered with grass, fragrant plants, and watercress. Hence the water flowed through a deep ditch towards the southwest.  All the country that we saw on this day's march appeared to us most suitable for the production of all kinds of grain and fruit. On our way we met the entire population of an Indian village engaged in harvesting seeds on the plain.

In the afternoon there were other earthquakes; the frequency of them amazed us.  Someone was convinced that there were large volcanoes in the mountain range that lay in front of us extending towards the west.  We found sufficient indications of this on the way that lies between between the Rio de la Porciúncula and the Ojo de Agua de los Alisos, as the scouts saw, adjoining the mountains, some large swamps of a certain material like pitch which was bubbling up. [25]

[24] "Alder (Sycamore) Springs", approximately at La Cienega Park, on La Cienega Boulevard between Olympic Boulevard and Gregory Way.  The phrase ojo de agua (eye of water) was often used in naming springs: an eye in the ground, whence water flowed or seeped.
[25] The La Brea Tar Pits. "Brea" means tar in Spanish.  While there aren't any active volcanoes in L.A. there are other natural oil and gas seepages like Coal Oil Point just offshore.
Posted by chickelit at 1:47 PM