What do La Befana, Santa Claus, & Bronco Bama all have in common?

The answer is that they were all named by children. La Befana derives from l'epifania which means The Epiphany in Italian. The story is Italian folklore, and tells of an old woman who was visited by the Three Wise Men on their way to Bethlehem. She declined to go along when invited, but later changed her mind and now spends eternity seeking the Christ child. She is/was the traditional Italian Santa Claus, bringing gifts to good children on the evening of January 5th, the night before the Feast Of The Epiphany. Here is her story in a little video I made to accompany the vinyl LP I knew as a child:


There has been some hand wringing that American-style Halloween has co-opted La Befana's image: 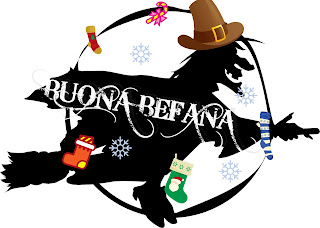 La Befana was obsessed with sweeping, which explains the broomstick. Now I'm wondering where/how the Halloween witch/broomstick came into popular American culture. Anybody?


Santa Claus needs no introduction -- his name derived from Dutch as Sinterklaas which itself came from Saint Nikolaas. Dutch children believe that Sinterklaas brings gifts on December 5th, the night before St. Nicholas Day. If you say Saint Nicholas very quickly as a child might do, you get to Santa Claus. Curiously, the traditional Saint Nick was a rather slender individual and wore blue rather than red. Did Coca-Cola intentionally rebrand him as an obese flyover state type? Recall that red used to be the Democrat (Deep South) color.

"Bronco Bama" of course was coined by a six-year old during the 2012 Presidential election; I draw no intentional similarities between Barack Obama, La Befana, and Santa Claus.