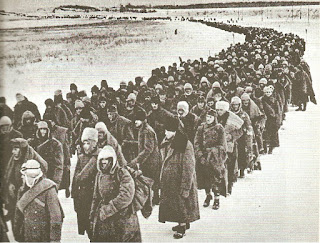 ...We have had to swallow a lot; will swallow this too! Stupid situation. You might say, devilishly difficult. Beats me how we are to get out of here. Not really my business though. We marched in here on orders, shoot on orders, starve on orders, die on orders, and will march out again all on orders. Could have marched out a long time ago, except the grand strategists haven't come to an agreement yet. Soon it will be too late, if it isn't already. One thing is sure, we'll march again on orders. In all probability in the direction originally planned, but without weapons and under a different command.

Kemner of the heavies right next to us has been shooting craps with Helms...Pay gone, watch, ring and an IOU, even his piano in home sweet home. Around here people get the most idiotic ideas. Am curious about the legal title to that gambled-away piano. Little Fatso won back his watch and ring. Perhaps he will win the summer-house tomorrow. But if both kick-off, how will the estates be probated? Would have liked to know all that, but there won't be any time. Am ignorant of many things, will probably get over that too. As I said in the beginning, we've had to swallow a lot. Tell it to Egon. Title: "Troubles of a Second Lieutenant in Stalingrad." When the chips are down--seems to me that will be soon--we'll be in there shooting.  Shoot guns even better than craps.

________________________
A key to understanding this ongoing series is here, and here. Each letter (39 in all) was written by a different and anonymous German soldier who knew he was going to die. I associate these letters with Christmastime for reasons explained at the links.
Posted by chickelit at 6:44 PM