Another Quantum of Solstice...


[this story continues in part from here.]

Ernest Rutherford discovered the atom's very kernel, the nucleus, but his tiny solar system model of the atom failed. It failed because it had a fatal flaw according to classical electromagnetic theory: Viewed side-on in the plane of the ecliptic, the orbiting electron oscillates charge from side to side and should behave like a miniature transmitter, broadcasting electromagnetic energy like a Marconi transmitter. Giving off energy, bit-by-bit, the electron should spiral into the nucleus. Rutherford never explained that away.

The Importance of Being Near Ernest

Luckily, Rutherford confided his 1909 experiments to young Niels Bohr prior to publishing them. Rutherford had invited Bohr to Manchester to study physics after a brief (and apparently unsuccessful) stint at Cambridge. Inspired,* Bohr spent the summer of 1910 and the subsequent spring (taking time off to marry and to honeymoon), devising his own theory which he published in 1913 (two years after Rutherford finally published his planetary model in 1911).

Bohr got around Rutherford's electron death spiral problem by postulating that it didn't happen! That may sound audacious and even glib, but he overcame "illogical leaps" by solving a bigger mystery which had puzzled generations of scientists: he explained the long-known but little-understood signature hydrogen lines observed in the spectra of stars (recall that stars are mostly hydrogen). According to Bohr, the lines represented quantum leaps in units of energy. He did the math for the hydrogen atom to prove it. The simplistic hope that atoms and the universe were fundamentally similar -- the too small to be seen and the too big to be noticed were whirling masses in motion or "turtles all the way down" -- shone briefly. 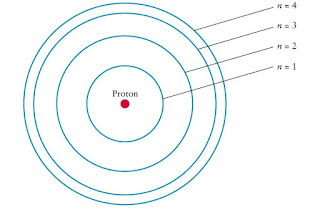 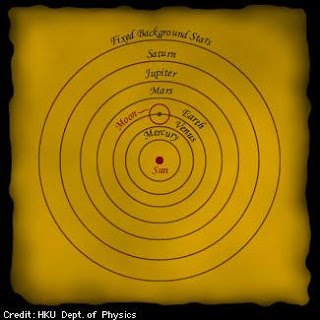 According to Bohr's new 1913 theory, electrons encircled a nucleus, but only in stable, fixed-distance orbits (shades of Bode's earlier but discredited planetary law?) but without the continuous death spiral energy radiation. Bohr called his quantized orbits "stationary orbits" (whence my title). A quantum of solstice or standing still.

Electrons in Bohr's stationary orbits still gained or lost energy -- but only by jumping from one orbit to a bigger orbit and vice verse. That was revolutionary. Bohr's math worked out too and depended on Planck's constant which was only 13 years old then.

My inspiration for the "Quantum of Solstice" is here at Victoria's old blog, to whom I dedicate this blog post.
Posted by chickelit at 6:16 AM